Our Fall Fantasy Fest continues with a chilling adventure into the frozen steppes, where an ancient tomb and a savage shaman promise doom to the noble centaur clans that seek to guide the heroes to their destiny. Check out Ron Lundeen’s debut solo project with Legendary Games, the 7th-level Pathfinder adventure The Horseshoe Calamity, packed with 28 pages and starting at just $5.99 at the Legendary Games webstore, Open Gaming Store, Paizo, and DrivethruRPG! 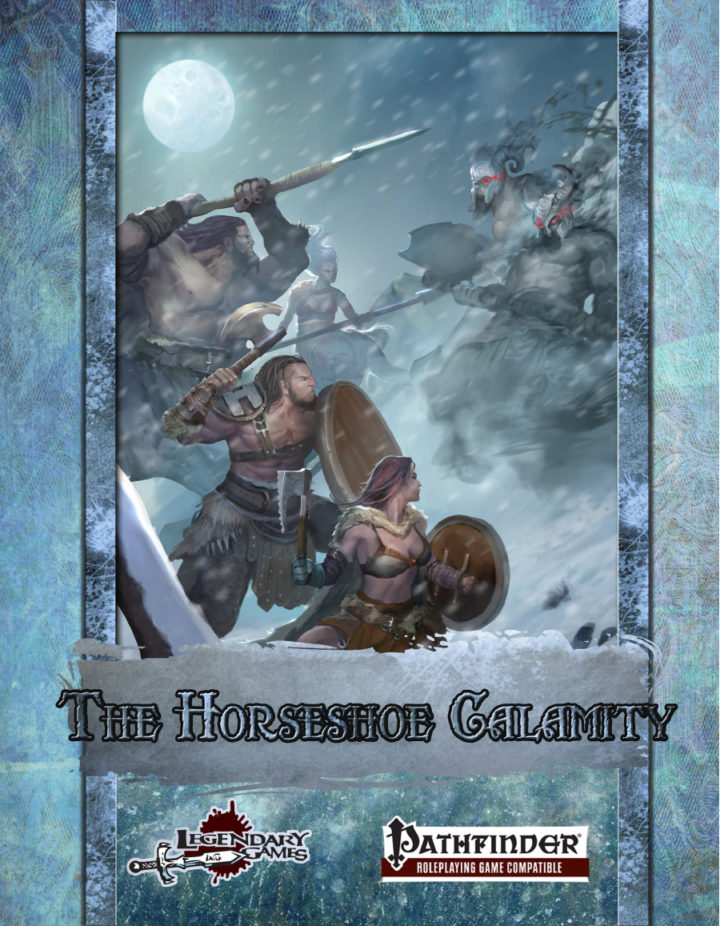 This killer new adventure comes on the heels of the amazing Eldritch Elementalism and the mesmerizing Malevolent Medium Monsters, but and this month also saw the release of the fantastic Forest Kingdom Campaign Compendium for Pathfinder earlier this month, and the 5E version should be going out to backers by the end of the month, and then available to the general public in early November!

Tomorrow we switch over our terrific TWO$DAY Product of the Week to the marvelous Mythic Monsters: Halloween, with a baker’s dozen of ghoulish and gruesome creatures plus festively frightening feats and magic items perfect for the holiday season, all at 70% for just $2 right here at the Legendary Games webstore! 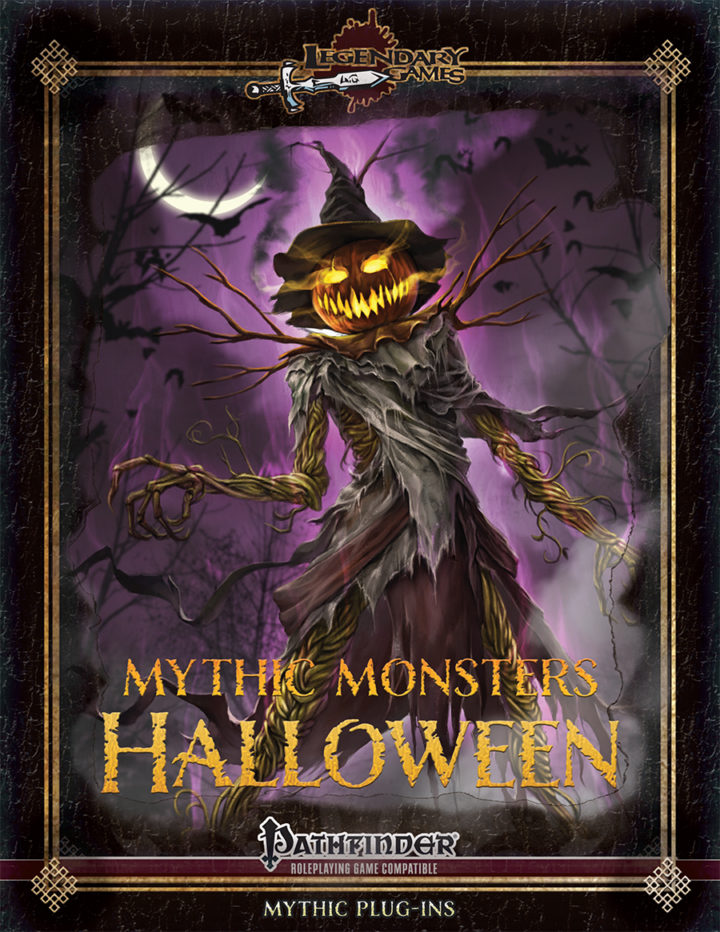 Speaking of exclusives, this may be our Fall Fantasy Fest, but never let it be said that we would miss a chance to unleash a little spectacular sci-fi for you, and to that end we have another exclusive right here at the Legendary Games webstore – the latest chapter of the spectacular Legendary Planet Adventure Path for the Starfinder Roleplaying Game! Perfect for 5th to 8th level characters, The Scavenged Codex by Mike Shel and Mike Welham is an epic interplanetary adventure for Starfinder exploring a corrupt and crime-ridden crossroads city and a distant backwater world of long-lost alien technology and crazed cults in search of the secrets of the ancients! You can grab this amazing 112-page adventure, complete with brand-new magic and technology, new monsters, primitive vehicle rules for Starfinder, a planetary gazetteer of the postapocalyptic world of Rythes, and an ongoing sci-fi fiction saga by Chris A. Jackson! You can grab this adventure everywhere in wide release this Friday, or you can get The Scavenged Codex for Starfinder RIGHT NOW exclusively at the Legendary Games webstore. Don’t forget to pick up the first adventure in this star-spanning saga, To Worlds Unknown by Jim Groves, and the fantastic Legendary Planet Player’s Guide by Neil Spicer, Alex Augunas, and Will McCardell! 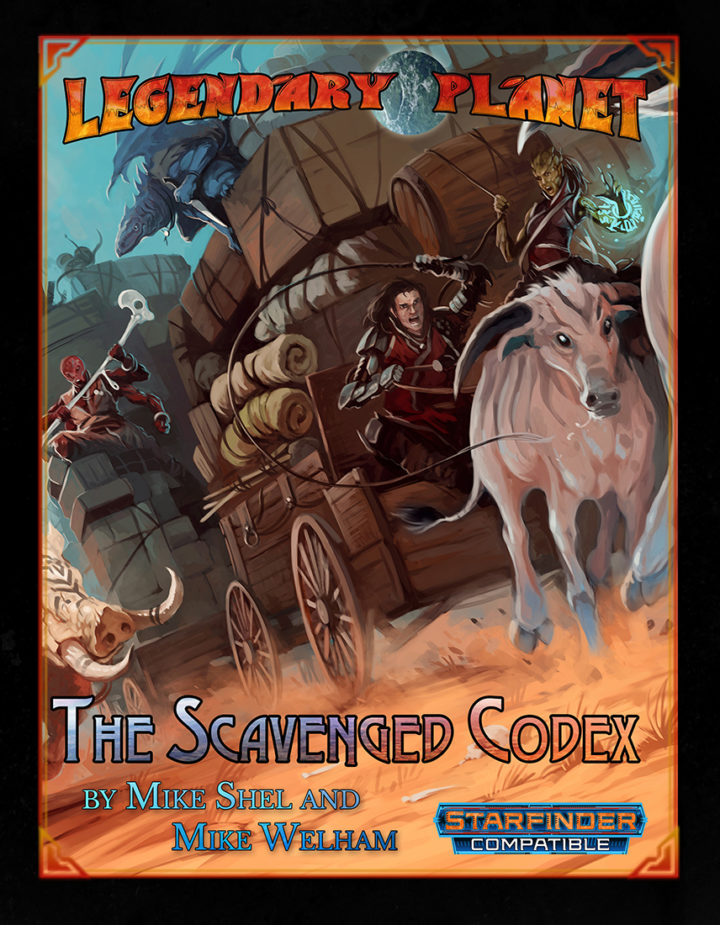 This MYTHIC MONDAY brings you a pair of Pathfinder products. First off, we have the final installment in our series of feats for horror games, Horror Feats S-Z, from Spawnlink to Zealous Mind! Pick them all up for just a dollar at the Legendary Games webstore, Open Gaming Store, Paizo, and DrivethruRPG! 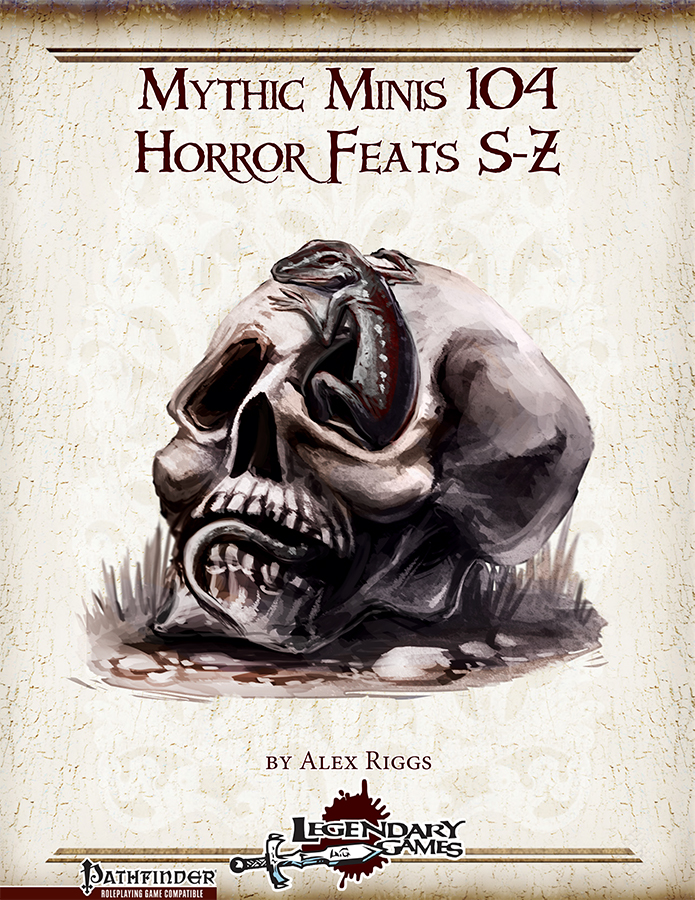 We still have one more special surprise for you next week, Mythic Minis 105: Halloween Treats! 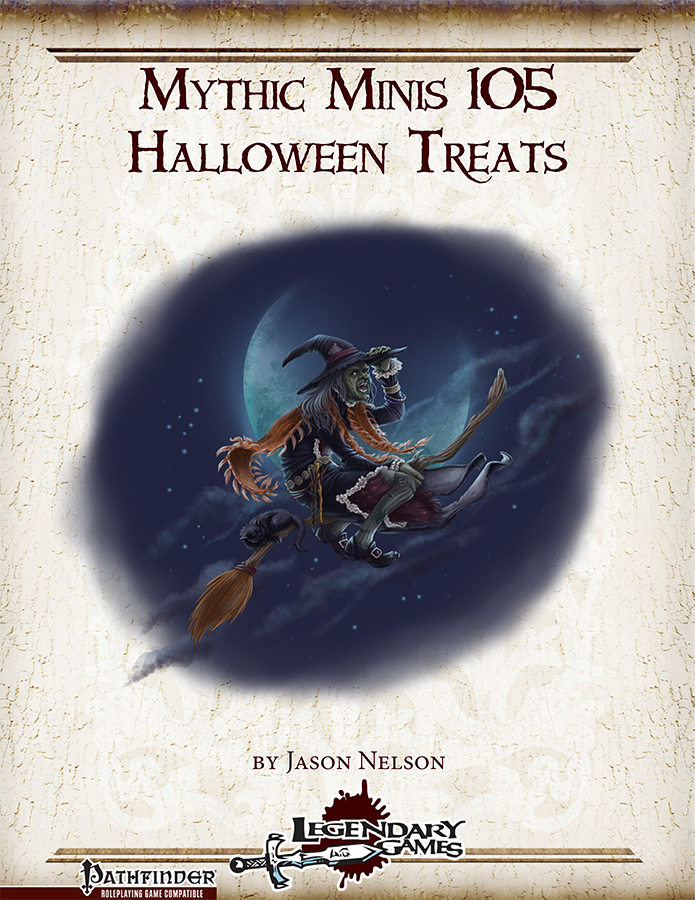 But before we get to that, today also marks the long-awaited debut of our RED THRONE Adventure Path Plug-Ins, starting with the first installment in our new Mythic Module Monsters series, featuring enhanced and exciting mythic versions of the creatures featured in the bestiary of the first adventure in that saga, like the reefclaw, soulbound doll, and raktavarna rakshasa! You can grab a half-dozen marvelous mythic monsters for just $1.99 at the Legendary Games webstore, Open Gaming Store, Paizo, and DrivethruRPG! 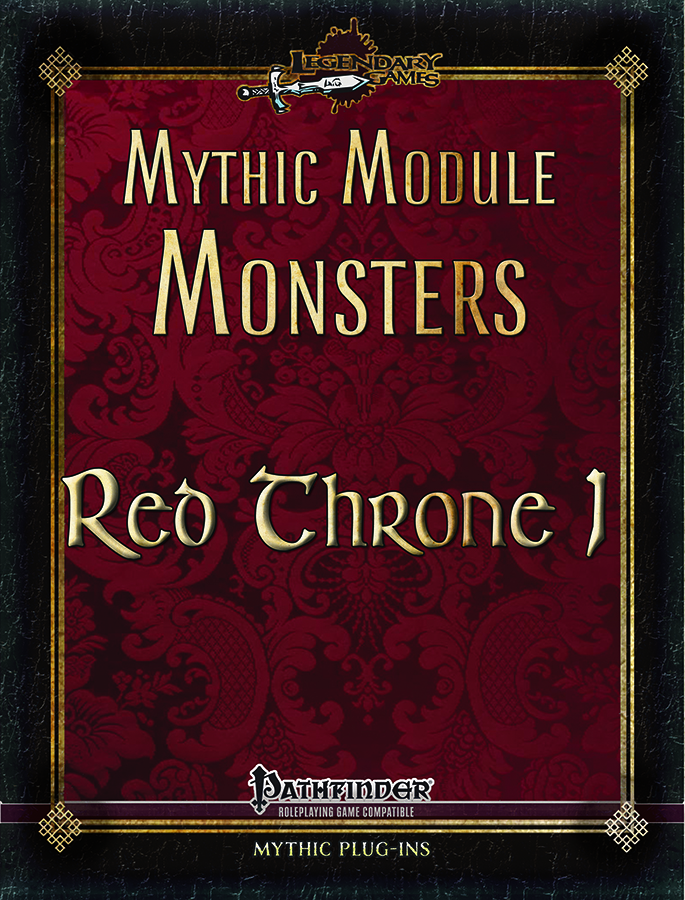 Last but not least, if you’re in the Halloween spirit don’t forget to pick up Mythic Monsters: Halloween, available everywhere fine gaming products are sold!

And that means that we’re a day late for MYTHIC MONDAY, where we are nevertheless pleased to present Mythic Minis 103: Horror Feats P-S! For just a buck you get 7 gruesome new mythic feats from Purging Emesis to Sacrificial Adept! You can grab this PDF today at the Legendary Games webstore, Open Gaming Store, Paizo, and DrivethruRPG! 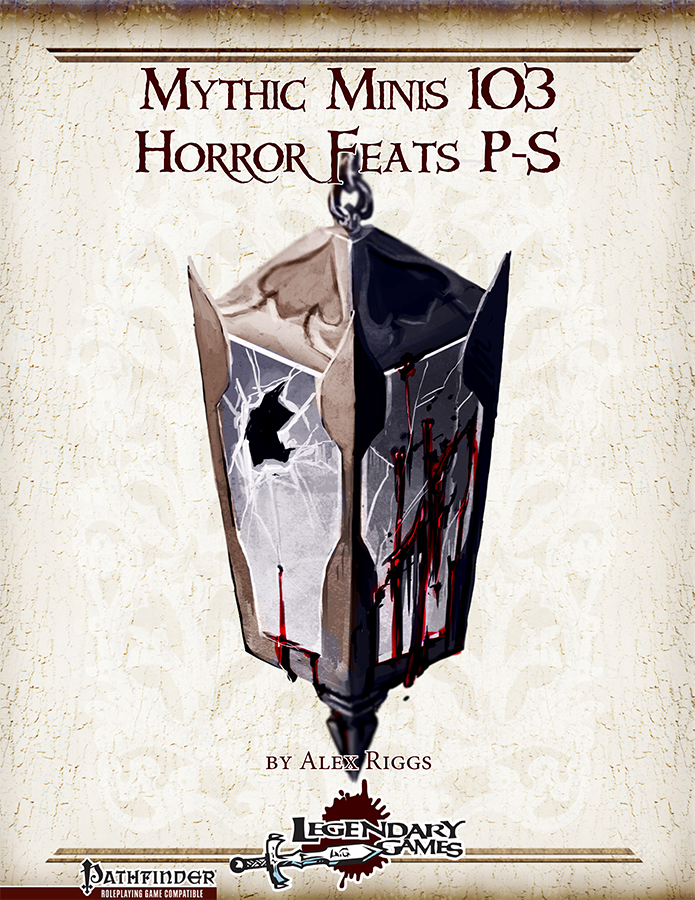 But the horror doesn’t stop there! This Friday we are debuting a new series for 5th Edition call the Gothic Grimoires! Each one is a short PDF, around 8-10 pages, detailing a single sinister spellbook containing sorcerous secrets and calamitous incantations, but also with a rich and disturbing history. The first installment is The Necrotic Verses, a collection of mystic secrets grounded in the corrupted composition of a musical maestro whose otherworldly obsessions drove him to madness and beyond yet left behind magical masterpieces like the Dead Man’s Frolic, Dance of the Empty Moons, and the Opus of the Golden King! Power awaits all who dare to delve into the sinister secrets contained within The Necrotic Verses! Coming soon for this 5E Friday! 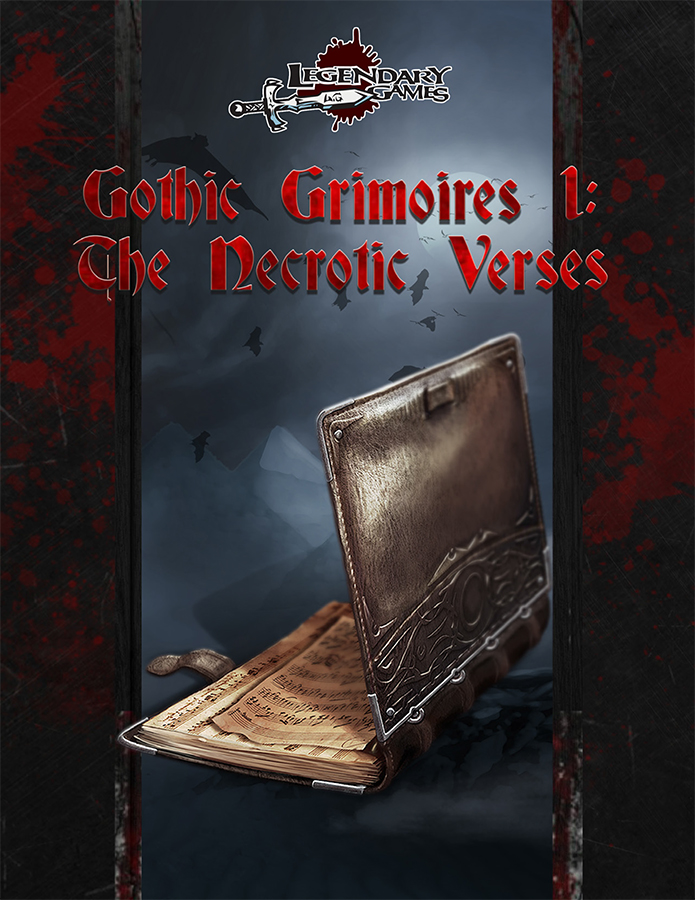 And, of course, the piece de resistance of the Halloween season is our tribute to all spooky things orange and black that go bump in the night. Mythic Monsters: Halloween is coming, with jack-o’-lanterns, crawling hands, bat swarms, nightwings, and hangman trees, but we also have some fun bonus material in here, including magic items like the ghostly gossamer and sack of gluttony, plus a couple of mythic path abilities like this one:

You have learned to shroud yourself with the mystic power of fear.

Benefit: As a swift action, you can expend one use of your mythic power to make your head invisible and partially incorporeal for a number of rounds equal to your tier, so that it appears you are entirely headless. You can still see, hear, and speak normally, but you cannot eat or drink and you gain a +2 circumstance bonus on saving throws against inhaled poison or gas. You gain a +2 bonus on Intimidate checks while apparently headless, and you have a 25% chance to ignore extra damage from a critical hit, sneak attack, or similar precision-based. While you are using this feat, undead ignore you as if you were using hide from undead (DC 11).

Special:  This feat applies only when you are mounted; if you dismount, your head becomes visible again.

Coming this Friday for Pathfinder! 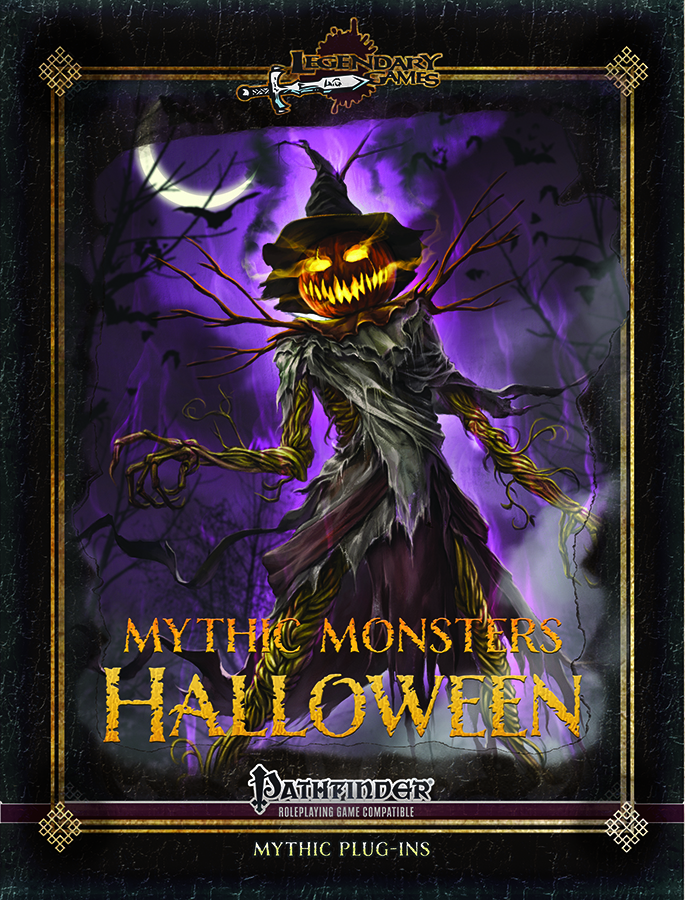