Our last preview took a closer look at our upcoming Path of Villainsproduct, which is a unique resource designed to make your villains really shine – and to stand up to the ludicrous amount of killpower your mythic PCs can dish out – but when it comes to FIREPOWER there is no monster more uniquely qualified in that regard than the DRAGON! Hence, we are pleased to present… 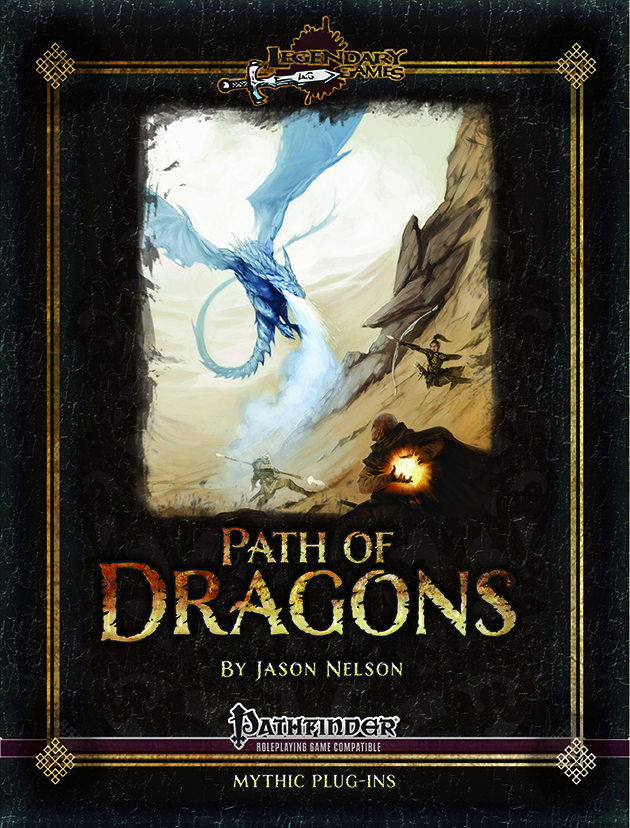 Using dragons puts you into a tough spot as a GM. While with most monsters it’s pretty easy to add in minions and lieutenants and to make the battlefield complicated with a whole evil organization, dragons are different. Yes, you CAN use all the same tricks with a dragon that you can use with an evil baron, corrupt merchant, or omnicidal archmage, but you kinda don’t want to. The iconic dragons of fantasy didn’t need backup to kick the ever-loving mess out of the heroes, and as a GM your sense of drama probably makes you want them to stand up on their own. They are the archetypal solo boss monster.

While pointing out that the rules and ideas in Path of Villains can absolutely be used to great effect with dragons, and that they are fully compatible and can be stacked right on top of what you will see in this product, I really wanted to create a set of rules that was totally dragon-focused. Some of them could easily be adapted to other creatures, but if you love dragons like I love dragons and you want them to be the complete badasses they are supposed to be, you are going to love Path of Dragons.

One point I should make is that these rules are designed to go with the mythic ruleset for Pathfinder, but you are completely within your rights as a GM to drop these kinds of enhancements on your dragons in any campaign, even if you’re not using the mythic rules! Who ever said the monsters had to play fair? And dragons most of all! Still, you’re not just ruling on GM fiat here. The mythic ruleset gives you an organized and cohesive system for beefing up the key villains in your campaign to epic proportions, to let them turn the tables on every broken combo your players ever tried to drop in your lap.

We’ll get into the meat of the product in tomorrow’s preview, but suffice to say there are over 20 dragon-focused universal mythic abilities, as well as a series of dragon-specific mythic paths that overlay right on top of their existing mythic ranks and provide an array of thematic mythic abilities for the arcanius, miser, sinister, skylord, titanic, tyrant, and watcher dragons! From hoard crawlers to dragonforge and wing ripper to experimental breath weapon, your dragons will never be the same!