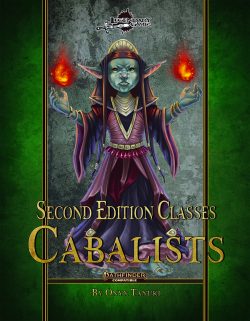 Legendary Cabalists is a brand-new class for Pathfinder Second Edition, an occult spellcaster devoted to the secret mysteries of hidden spirits within the world and in worlds beyond! These occult spellcasters tap into the hidden world of magic through their familiars, either following the teachings of a cabal like the Beastcallers, Leyline Cult, or The Seekers of Perfect Form or attempting to remain unbound to master their powers alone. Each cabalist binds with an animus like pyre, storms, portents, or wisdom, and this mystical communion shapes their eldritch power, sometimes even changing their casting tradition, with animus blessings and bonus spells, familiar adaptations, and taboos! You’ll find over 150 options here to expand your cabalist capabilities, including nearly 50 class feats like Bizarre Weaponry, Chant, Secret Lesson, Animus Wellspring, and Toil and Trouble, general feats like Familiar Inspiration and Mystic Animal Tattoo, and spells like ice tomb, silverlight, and blood mantis clutch! You’ll also find complete rules for nearly 20 familiars, from common toads and spiders to oozes, imps, tomes of teeth, and broomstick mimics! You’ll also find sample builds and a fully developed sample cabalist and familiar to show off what the class can do, with a detailed history and personality to drop into your campaign as a mentor, rival, or adversary! Grab this fantastic 54-page class book for Pathfinder Second Edition today and Make Your Game Legendary!