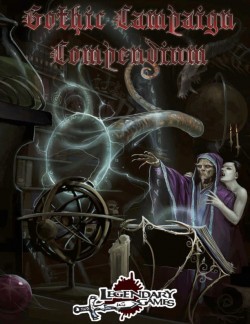 The Gothic Campaign Compendium from Legendary Games is a beautiful 256-page hardback (or PDF) of lavishly detailed and lushly illustrated Gothic glory that will enliven and enrich any campaign that dabbles in the realms of horror. Within you will find:

If you are incorporating horror themes in your Pathfinder RPG campaign, this an indispensable resource for chilling surprises and horrifying new possibilities to your game. Brought to you by the Legendary Games team of Jason Nelson, Neil Spicer, Greg Vaughan, Clinton Boomer, and Clark Peterson, the Gothic Campaign Compendium has everything you need to Make Your Game Legendary.

The PDF version is extensively linked to online resources for Pathfinder rules.

This compilation  includes the entire line of Gothic Grimoires: The Necrotic Verses, To Serve A Prince Undying, Spellbones Of The Devourer, The Sepulchral Swaths of Tanoth-Gha, On the Unseen Calculus of Inverse Refraction, plus The Mad Doctor's Formulary, Construct Codex, Treasury Of The Macabre,Tomes Of Ancient Knowledge, Cultic Cryptomancia, Beyond the Void, Gothic Heroes, Mutant Manifesto, Feasting at Lanterngeist, The Murmuring Fountain, and The Fiddlers Lament.