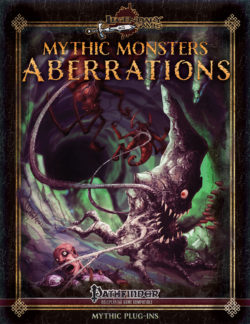 Mythic Monsters: Aberrations brings you a dozen and one misshapen mutants, from old-school monsters like the hideous otyugh, the brilliant but brutal tentacular roper, the clever cloaker, and the treasure-trap mimic, to newer hunters like the swift and sneaky choker. You'll find adaptational evolutions like the veiled master and the vampiric mist alongside the fondly remembered relics of long-ago genre-straddling mash-ups like the wolf-in-sheep's-clothing or the fabulous froghemoth!  A few aberrations have folkloric roots like the deadly ettercap, while others are stitched together out of nightmarish pieces like the vemerak, or had their birth on a toy shore shelf like the legendary rust monster! To this august assemblage, of aberrations CR 3 to 17, we present a brand-new beast, the zyoselak, a floating multi-segmented swarm of gelatinous horror that is quite literally brain-meltingly deadly! As if this were not enough, we also bring you 9 mythic spells for making mythic mutants of your very own!