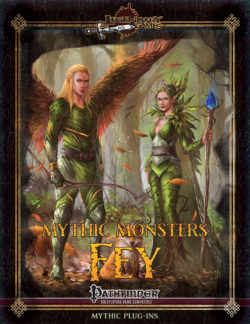 Fairies Both Friendly and Fearsome!

Mythic Monsters: Fey brings you an awesome array of mysterious and magical creatures from the realms of Faerie. These capricious creatures range from CR 1 to CR 20 and include monsters malevolent and benign. Some fey are helpful spirits, from the industrious brownie to the far-striding fastachee cultivating their corn, or the musical grigs fiddling in the night. Others have far more sinister intentions, from anguished fiend-blooded forlarren to sadistic tooth fairies. Like them, gremlins come in many shapes and sizes, all of them notorious from pugnacious nuglub thugs to vengeful jinkin saboteurs. Many fey simply wish to be left alone, like sprites and sprite swarms guarding the wild and beautiful places of the world from intrusion, or the serene and beautiful hamadryad queens who rule the forests. Mortals may seek to bargain with the fey, but woe betide any who double-cross a blood-hungry sangoi or a darkling vilderavn raven knight! As if a dozen existing monsters were not enough, the brand-new horzitoth is a nonesuch, an urban fey that devours dreams and feasts on fatigue, and savoring the loss of sleep for those who welcome it into their homes as an uninvited guest. In addition to the featured creatures, we bring you the fabulous fey-bound knight prestige class, perfect for those heroes of might and magic who have sought service with the lords and ladies of the fey realms!

The Mythic Monsters series from Legendary Games brings you dynamic and exciting mechanics alongside evocative and cinematic new abilities that really help creatures live up to their flavor text, whether they are creatures of real-world myth and legend or creatures born out of the RPG tradition itself. These creatures can work just as well in a non-mythic campaign as they do in one that incorporates the full mythic rules, as you can throw them at your jaded players who think they've seen it all or know the standard monster stats as well as you do. That look of surprise and "What was THAT?" will warm any GM's heart.

This all-new 32-page supplement by Mike D. Welham, Jason Nelson, and Loren Sieg is a terrific complement to the Mythic Monster Manual, with over 220 mythic monsters and an awesome array of monster-focused abilities, feats, and more for your Pathfinder game! Pick up both books today and Make Your Game Legendary!