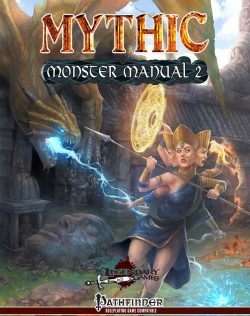 More Magnificent Monsters!
The Mythic Monster Manual II brings you dynamic and exciting mechanics alongside evocative and cinematic new abilities that make the creatures in your Pathfinder campaign live up to their flavor text, whether they are creatures of real-world myth and legend or beasts born of the RPG tradition itself. Some are allies extraordinaire, companions and mentors for your aspiring heroes. Among the mythic foes you will find within, even the lowliest minions possess a special spark, and the mightiest among them stand with the greatest threats a Pathfinder campaign has ever known. These creatures work just as well in a traditional Pathfinder campaign as they do in one using the full mythic rules! While this book is an indispensable expansion to the roster of mythic monsters in the official rules, they also provide a delightful change of pace for players who think they've seen it all or know the standard monster stat blocks as well as you do. This amazing array of richly developed mythic creatures also contains dozens of pages of supplemental material for making the mundane of monsters something extraordinary. When you pull out the Mythic Monster Manual II, that look of surprise and "What was THAT?" will warm any GM's heart!

- Over 220 different mythic monsters, ranging from CR 1 to CR 30, including classic monsters from ochre jellies to ogre magi and sahuagin to sphinxes, along with even more mysterious menaces like the hellcat, xorn, will-o'-wisp, and rakshasa maharajah!

- Over two dozen brand-new mythic monsters, drawn from fantasy, myth, literature, and legend, from Scylla and Charybdis to the buraq, wendigo, and Fenris Wolf, with detailed ecologies and lore!

- Appendices detailing monsters by challenge rating, type, and subtype (including new subtypes like the fungus and troop subtype), as well as guidelines for mythic familiars and companions.

- Hyperlinked referencing all base monster stat blocks and non-core rules options for ease of reference in the PDF version.

- and much Much MUCH MORE!

The Mythic Monster Manual 2 is an ideal companion volume to the Mythic Character Codex, Mythic Hero's Handbook, Mythic Spell Compendium, and the original Mythic Monster Manual, as well as awesome expansions like Path of Dragons and Path of Villains to make your ultimate enemies shine the brighter and bring down the wrath like thunder! Add any of these expansions to your Pathfinder Roleplaying Game campaign and Make Your Game Legendary!