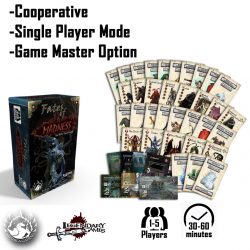 Fates of Madness is a cooperative role-playing light adventure card game based on the popular Gothic Campaign Compendium by Legendary Games with game design by Mythica Gaming. The game starts with four adventurers setting out to destroy the evil lurking in the wilderness. Different scenarios and monsters challenge the party's skill and resilience while they scavenge for treasures and potions. This diceless game is varied by the use of Fate cards and skill level to determine success or failure. As the journey continues, madness sets in. Will anyone survive or will it end in a total party kill? This horror themed adventure is the first joint project between Legendary Games and Mythica Gaming.

Players begin by selecting four* adventurers to create a party.

Each round the adventuring party draws a Location card. Location cards are either a Scenario or a Monster. Scenarios contain traps or hazards to challenge the party's skill and resilience. Monsters attempt to kill the party more directly.

Throughout the game players draw Fate cards to determine the success or failure of their actions.  Some Locations add Madness cards to the Fate deck, making the path increasingly difficult.

After each Location, players search for treasure, potions, or healing.

The game ends with the appearance of a boss monster for the final battle. If anyone survives the encounter, the game is won!

*Game can be played with 1-4 players as adventurers, and an optional 5th player can play as a GM.

The game is comprised of two sizes of cards, Tarot sized and Poker sized. You will find the following in the base game but we hope to reach all stretch goals.

Characters in the game

Locations in the game