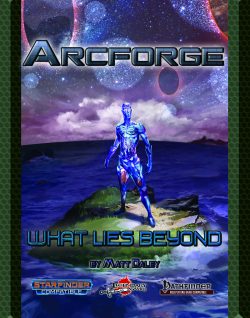 Far beyond the reaches of Vandara lies a vast multiverse of horrors and wonders. Amidst the blackness of eons, beings of incomprehensible age and magnitude war with each for the destiny of all of the universe. In their wake, countless miracles both scientific and magical lie strewn across the cosmos. To uncover the mysteries of these countless interstellar beings is to recognize how infinitesimal even the greatest triumphs of Vandara or Aurin truly are.

Arcforge Campaign Setting: What Lies Beyond is the final installment exploring the Arcforge universe, bringing you a treasure trove of Starfinder Roleplaying Game and Pathfinder Roleplaying Game rules and options for players and GMs alike alongside extensive lore and mechanics for the vaster cosmology of the Arcforge universe. Uncover the nature of the planes and learn about the forces which govern them with incredible options for GMs and players alike! Learn of the Logi, the seven guiding forces at the heart of cosmic conflict! Harness the might of Mythic Sphere Masteries for the Pilot and Technomancy spheres while invoking new spells and powers such as Biocloaking, Event Horizon, and Voidsong! Deal with strange outer powers such as Zenith Aeons, Hero Passages, Meggidon Titans, and Nihileon Unmakers! Finally, build a wide variety of new monsters with eight new Templates, ranging from the nightmarish Silenced to the brilliant Unshackled AI! An endless realm of adventures lies beyond in this incredible 92-page sci-fi supplement for Starfinder and Pathfinder, so open your eyes to the vastness and Make Your Game Legendary!