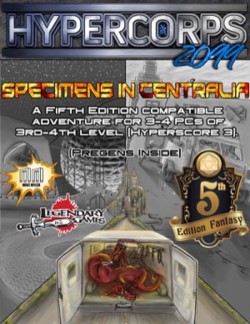 The operators are already on their way to Centralia, PA, where a coal mine that caught fire over a century and a half ago has finally died down. Forsyte Technologies© recently lost an incredibly important research subject from one of their labs on the outskirts of the metropolis—a hyper-drake named Skrygrard—and its tracking signature goes dark near one of the entrances into the subterranean network of passages. Coming back with the specimen alive means a lucrative 10,000 bytecoins, but reduced compensation beats dying in a soot-choked tunnel.
Specimens in Centralia is a 5th Edition-compatible adventure in the world of Hypercorps 2099. The module begins with the operators (the PCs) en route to Centralia's coal mines, the sight of a fire raging since 1962. Within is their quarry, but how they take it down and bring it back to Pittsburgh plays a large role with how much they'll get paid! While this adventure is ideal for a party of four operators of 3rd-4th level (hyper score 3), it is also suitable for regular PCs of 7th-8th level.
Inside the 26 pages of Specimens in Centralia you'll find:

If you aren’t positive this exciting new Fifth Edition supplement is for you, download free preview PDFs of Hypercorps 2099 from right here at DrivethruRPG to see what amazing things await you within this deluxe tome.

Dive into the future with all the grit, fervor, and intensity you can offer for the operation ahead—there are bytecoins to be made, prestige to acquire, and power to be won!