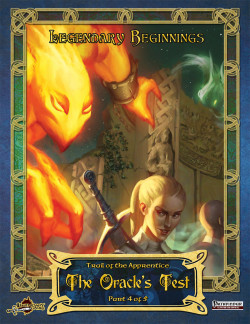 Visions of Destiny or Doom!

A mysterious plot is unfolding. Following clues about the theft of a pair of ancient statues, the PCs have discovered who hired the Elverin Skulk thieves’ guild to rob the Lord Mayor of Port Fairglade. It’s clear that the guild’s client is a dangerous and powerful man, but without further information, they can do nothing to stop whatever plans he might have. But there is hope. Deep in the ancient ruins of Sol’Ithmanna rests a stone portal. When opened with the proper keys, the portal will grant access to the domain of a fey oracle who can help them discover the villain’s true purpose and how they can stop him. But the oracle only gives his aid to those who can pass his tests. Are the PCs up to the challenge? The Oracle’s Test is an adventure for 4th-level characters.

The Oracle's Test is an adventure for 4th-level characters. It is part three of Trail of the Apprentice, a full campaign made up of 5 interconnected adventure modules for the Pathfinder Roleplaying Game, whether you're playing with the standard rules or the simplified boxed set for beginners! The Trail of the Apprentice saga and all adventures in the the Legendary Beginnings line from Legendary Games are designed as exciting adventures suitable for all ages, but specially designed for those new to roleplaying and those on the younger side. Grab this awesome adventure page adventure today and Make Your Game Legendary!

Download includes a 50-page adventure plus a 20-page art and map folio, including unkeyed player-friendly maps!