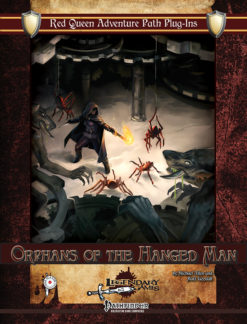 Urchins Underfoot
It takes a special kind of thief to escape the noose, and the legend of the Hanged Man and how he cheated death has been the stuff of barroom boasts for years. Whether he finally died and returned as a ghost, or set sail for a tropical island with his ill-gotten gains, someone has been using his noose as a calling card across the city. At the same time, the street gangs of the slums have risen up to in a wave of theft and violence that have the city on edge. When their predations strike a bit too close to home for your heroes, you must seek out the hidden masters of the city's seedy underbelly to put a lid on this urban uprising before things get out of control!

Orphans of the Hanged Man is a Pathfinder Roleplaying Game adventure for 1st-level characters. It can be easily expanded for a small or standard group of PCs, but it also is ideally suited for use as a one-on-one adventure with a single PC and GM. It can be run as a standalone adventure or side-trek, as a complement for the first adventure in the official “Red Queen Adventure Path,” or as the first adventure in full-scale One Player Adventure saga! Bring home this 40-page urban adventure with a touch of whimsy for your Pathfinder Roleplaying Game and Make Your Game Legendary!