The latest and greatest Mythic Monster product from Legendary Games, Mythic Monsters: Inner Planes is ready and waiting for you right here on our very own webstore, as well as on our great partner sites like shop.d20pfsrd, Paizo, and DrivethruRPG!

Just take a look at the awesome abilities that lurk within for making monsters majorly memorable! As befitting his fiery temper, the mythic noble efreeti malik boasts of his searing arrogance!

Searing Arrogance (Ex): A mythic efreeti gains blistering invective as a spell-like ability, which it can use at will. It may spend one use of its mythic power to use the mythic version of this spell instead, or two uses of its mythic power to use the augmented mythic version. In addition, it adds its Strength modifier on Intimidate checks made against non-mythic creatures, and it is immune to Intimidate checks made by non-mythic creatures or creatures whose mythic tier or rank does not exceed their own. If its Intimidate check exceeds the DC by 5 or more when using Intimidate to demoralize creatures, they are frightened instead of shaken.

Or take the power of their earthier equivalents, the mythic noble shaitan pasha, and one of the powers that sets them apart even amongst the treacherous and tricksy ranks of the genie races.

Legalistic Entrapment (Su): Mythic shaitans are the cleverest wordsmiths of all the genie races, able to lure a mortal with promises of wealth and power only to subvert their arrangement in an unexpected way. When a mythic shaitan grants a wish, it may make a Bluff check opposed by the recipient’s Sense Motive check. If the mythic shaitan wins the opposed check, it may expend one use of mythic power to lay a mark of justice or geas upon the recipient of the wish. This power cannot affect creatures whose mythic rank or tier equals or exceeds their own.

Of course, Mythic Monsters: Inner Planes is not just about genies; look for amazing abilities for all manner of extraplanar enemies (or even allies) from mythic mercane, salamanders, xill, xorn, and more, plus the all-new liminal hound! COME AND GET IT!!! 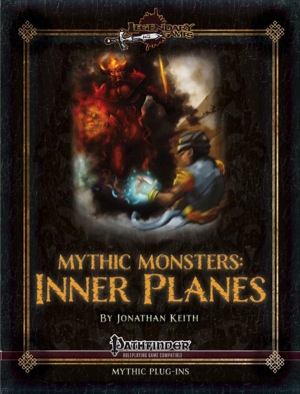