Happy New Year to all from Legendary Games! Behold, the first Legendary release of 2019!

We are excited and delighted to debut our latest class expansion for the Pathfinder Roleplaying Game, courtesy of the dynamic Dave Nelson and the highfalutin’ Hal Kennette as they delve into the world of sword and spell with the magnificent magus class! You’ll find not just a ground-up rebuild of the magus class, complete with an entire system of eldritch tomes for learning their melding of magical and martial, but also a ton of awesome archetypes, new magic items, spells, feats, and so much more! Grab this fantastic 40-page book today at the Legendary Games webstore, Open Gaming Store, Paizo, DrivethruRPG, and soon at Amazon! 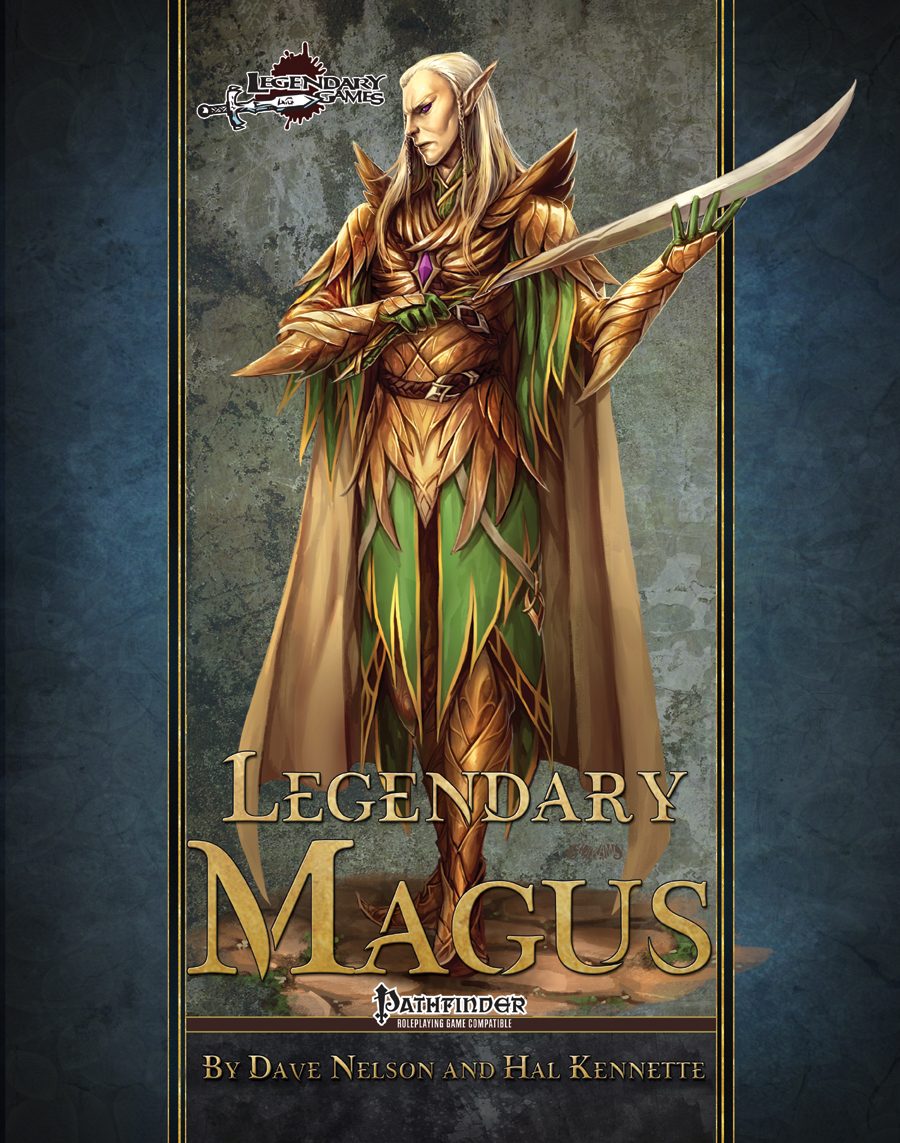 What will you find inside these pages? Check it out!

Legendary Magus is the latest volume in our new series of player-focused supplements, this time focusing on the master of spell and sword: the magus. This class debuted in Pathfinder Roleplaying Game Ultimate Magic, blending melee sword-swinging with an arcane sorcery, combining might and magic in one irresistible package. The Legendary Magus takes this composite class to the limit, redesigning the class from the ground up and combining classic arcana with new class features built around the eight eldritch tomes that guide each magus’ study in the arts of combat and casting, allowing them to adapt their abilities to an array of fighting styles. You’ll find eleven amazing archetypes within, from the fire breathing Dragon Fang to the teleporting Warp Tempest. The valiant Drakeguard wields lance and spell from the back of a draconic mount, while the Legendary Kensai abandons armor to become a true master of the sword. Better still, you’ll find over 50 incredible arcana, feats, spells, and magic items, from Polymorphic Caster to Technique Specialization and from arrow squall to the vambrace of pain! Plus, you’ll find a fully developed sample character, Iris Pageknife, ready to drop into your campaign and show off what the legendary magus can do! Grab this incredible 40-page character class supplement by Dave Nelson and Hal Kennette and Make Your Game Legendary!

Of course, we’ve got plenty more in store for you, including huge new releases coming soon like the Mythic Character Codex and Mythic Monster Manual 2, plus high-tech amazement with Arcforge: Psibertech expanding the linkage of mind and machine for Pathfinder, and the spectacular Star Intrigue and Star Battles for Starfinder, as well as the long-awaited Alien Codex and Aethera Field Guide for 5E and Starfinder and, at long last, the climactic final chapter of the Legendary Planet Adventure Path, To Kill a Star. Layout on the compilation versions of Legendary Planet has already begun while Steve Helt and Jason Nelson finish the final adventure. It’s taken much longer than we expected, but we are closing in on the finish at last!

Plus, the Fates of Madness card game, Pirate Campaign Compendium (5E), and Alien Bestiary (Starfinder) are all scheduled to arrive by the end of the month, so we’ll be able to get those books and games processed and headed out to all of our Kickstarter backers first and then loaded and ready for all of YOU!

Thanks for all your support in the past and let’s make 2019 truly a Legendary year!