One of the first products we did at Legendary Games was Gothic Heroes,a set of ultra-detailed and fabulously crafted characters for use with a certain Gothic Horror AP of our mutual acquaintance, or with any campaign where horror tropes were on the menu. Since then we’ve followed up with Imperial Heroesfor the Far East AP and Conquering Heroesfor the River Kings AP. Even now we are nearing release of Nautical Heroesfor the Pirate AP; we’ve previewed some of the artwork already, and we should be ready to release this one in the next few weeks.

However, today I wanted to highlight Endzeitgeist’s review of Righteous Heroes,the fourth installment in the series and the one devoted to the Righteous Crusade AP.

The book ranks among the most beautiful I’ve seen, even among Legendary Games oeuvre. The artworks by Lance Red, Tanyaporn Sangsnit and Colby Stevenson deserve accolades – these characters jump to life straight from the page. Neil Spicer knows how to write compelling CHARACTERS. Not just some pregens, CHARACTERS – people that are compelling enough to use as NPCs even if you’re not looking for pregens, characters that do not follow each stereotype. Indeed, the pregens herein, in whatever constellation used, brim with roleplaying potential, feature so many cool angles, so many story-seeds, that even if used in a context that is not the Wrath of the Righteous AP, that any DM worth his/her salt can craft a whole campaign around them alone. Yes. That awesome. Their connections make them a party from the get-go, with all dynamics that entails and in the end, the characters also are superb reading. It should also be noted that the advice on character advancement also provides mythic path-selection advice. Apart from the missing bookmarks, I have exactly zilch to complain about here – these are, even by Legendary Games high standards, probably the best Pregens released so far and deserve no less than 5 stars + seal of approval.

You can read Endzeitgeist’s full review on his own website here! 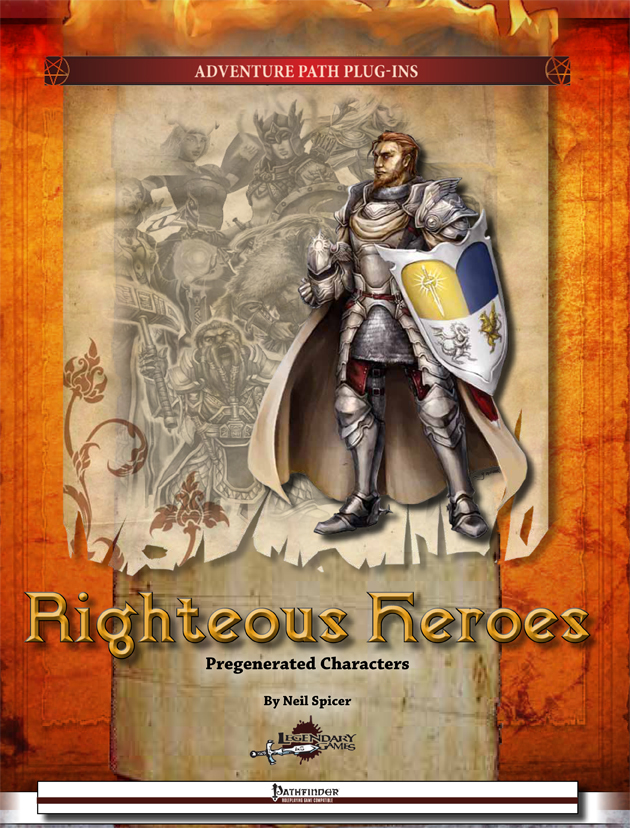