The Legendary Planet project is an adventure path taking you into a brand-new universe, but one that is familiar in many ways. The character classes you know exist. The races you know exist. The monsters and spells and items you know all exist. But they are now just one part of a much larger universe. The fantasy worlds we know and love are spinning around their stars in the heavens, but they are not alone. There are things in the universe far older and far stranger than what we know, races and beings both malevolent and benign. The elder races from beyond have touched the universe, guided and shaped its creation and evolution. To some these elder races are entirely forgotten, to others just a legend, but to others they are gods, lighting the path to enlightenment… or conquest.

Your heroes will venture first To Worlds Unknown, to the dusty alleys of Zel-Argose, a wretched hive of scum and villainy but also a gateway hub to all manner of possibilities, whether it be a way back home or a way forward into a much larger universe where secrets lie on distant worlds, from postapocalyptic deserts to the deep caverns of a tidally locked planet, from water worlds to asteroid mines and more. Along the way you’ll meet klaven, elali, krang, ultar, onaryx, hetzuud, queborrin, loran, zoress, yorynn, divymm, barrgra, jagladine, tauslek, and more. Some will be friend, some will be foe, but whom to trust?  Probably not the bil’djooli. People with tentacles cannot be trusted. It is known. 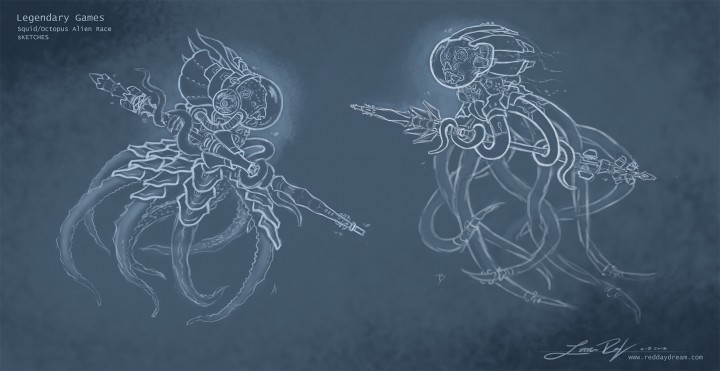