This product, another in our Gothic Grimoires line, is the first to really straddle the border between our Gothic and Far East AP Plug-In product lines, because while this tome certainly includes echoes of horror themes, it also deals with the use and expenditure of ki within that context. It is a tome primarily directed at inquisitors and those sympathetic to their ethos, and it centers upon absolute loyalty, sacrifice, and a fealty that extends beyond the walls of death. This notion of protection includes both an active defense, but also a preemptive strategy of persecution, torture, and (when sadly necessary) the sacrifice of those whose loyalty is in question. protection against and purification of traitors in their midst. Obedience is all, control is all, when you serve a Prince Undying.

Below find Frank Hessefort’s lovely illustration of the time tome, including the polished three-arm symbol of the Undying Prince. 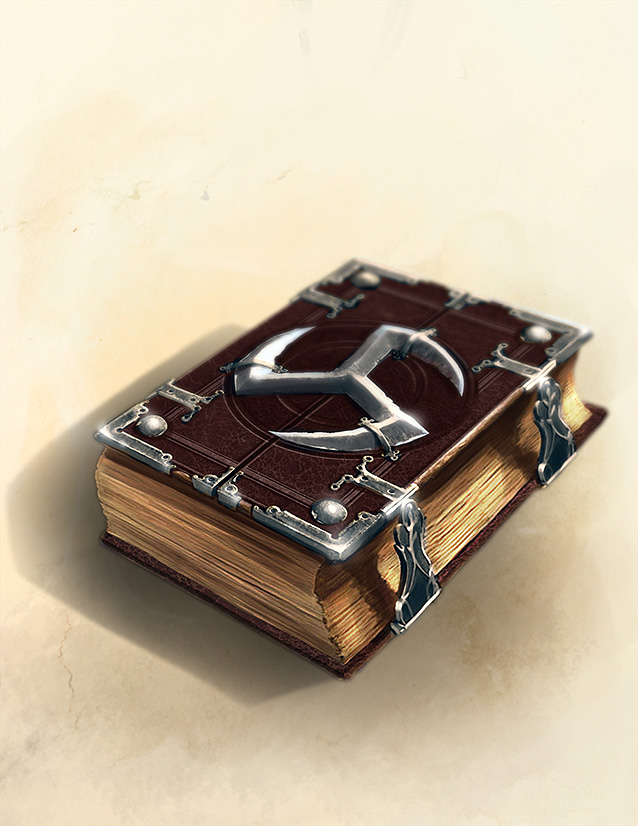 Place your right hand on the book, and solemnly swear...

Within these resplendent covers you will find new inquisitor judgments like bodyguard and pursuit, new monk vows of obedience and self-sacrifice, and several new spells as well for dealing with those pesky subjects who just won’t do what they’re told and need a little extra incentive to toe the line… OR ELSE! You start casting extravasation of tears or ruthless beating and they’ll toe the line.

While today’s picture may be worth a thousand words, we’ll challenge that notion tomorrow when we present some of Boomer’s words on the subject, describing some of the flavor and the purpose inherent in the pages of To Serve a Prince Undying.