For 80 weeks we supplied a steady diet of Mythic Minis, bringing you bits and pieces of mythic fun from feats to magic items to new rules and more, but our Mondays have been a bit less mythic since last summer… until NOW! 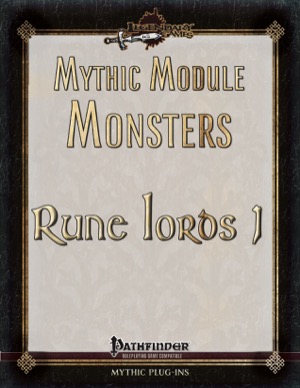 We are pleased to present to you our brand-new series of Mythic Module Monsters, short collections of monsters drawn from your favorite official Adventure Paths for Pathfinder. Want to spice up an old AP or bring an added dimension to a new one? Grab mythic versions of EVERY new monster presented in the bestiaries of that AP, all in one place. Each installment covers one issue of the AP, and what else would we start with but the very first AP, featuring those nasty Rune Lords! A new issue will be coming every week or two, after which we’ll start working on a new AP!

You can pick up these Mythic Module Monsters one issue at a time, starting with Rune Lords 1 right here at the Legendary Games webstore, Open Gaming Store, Paizo, or DrivethruRPG! Better still, you can subscribe to all six issues of Mythic Module Monsters for your favorite APs and save 10% off with the Rune Lords Subscription, available exclusively right here at the Legendary Games webstore!