Skip to content
Home » News » The ALIEN BESTIARY is coming for Starfinder and 5E!

The Stars are Right and it is time for the Aliens to Awaken!

Coming to Kickstarter in September from Legendary Games, an epic encyclopedia of alien adversaries and cosmic creatures perfect for your sci-fi adventuring pleasure, whether you’re playing the brand-new hit Starfinder Roleplaying Game or taking your 5th Edition campaign beyond fantasy and into the stars! 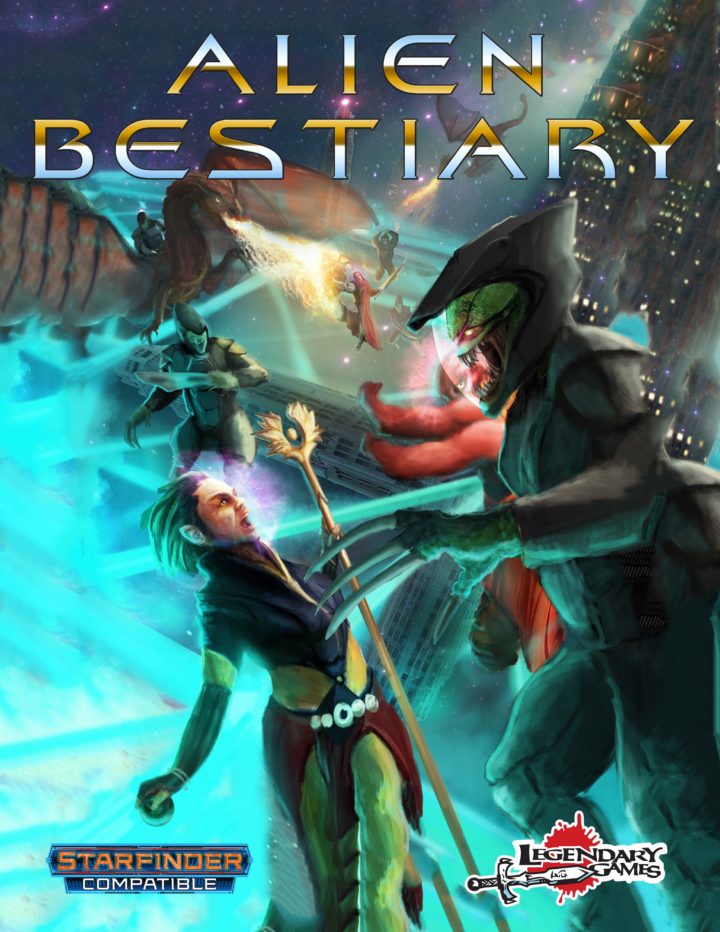 The above is just a cover mock-up (wait until you see the final cover art!), but there is nothing “just” about the Alien Bestiary! This is a full-sized, full-color hardback bestiary featuring over 200 incredible aliens of every description, from tiny robot walking eyes to Lovecraftian Great Old Ones, from humanoid races both friendly and foul to inhuman abominations from the darkest nebulas. Of course, fans of the star-spanning Legendary Planet saga will recognize the fiendish foes like the savage klaven footsoldiers, sinister jagladine genetic engineers, warmongering bil’djooli shock troopers, and many, many more! 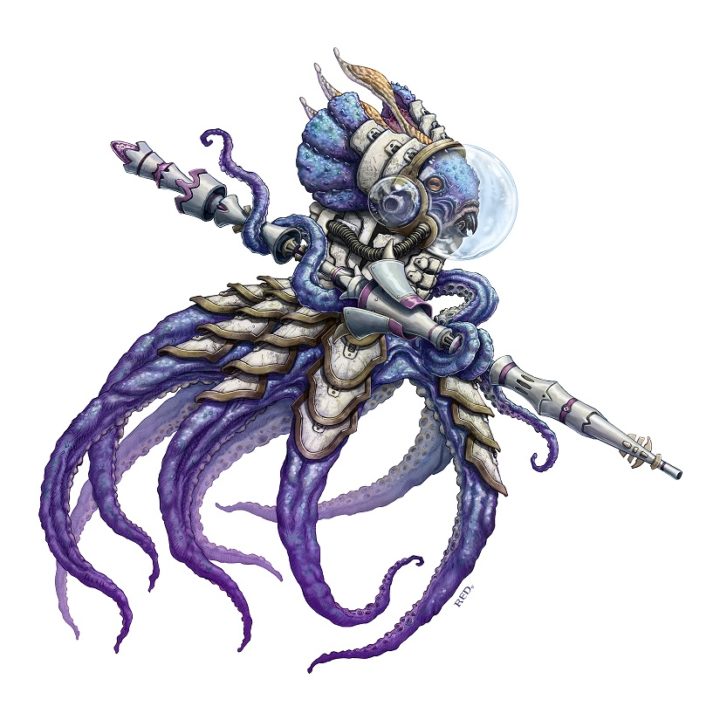 In addition, as part of our continued partnership with Robert Brookes and the gang at Encounter Table Publishing, fans of the awe-inspiring Aethera Campaign Setting will also find dozen more exciting additions to their spacefaring saga, from the invading taur and aether-touched infused to the organic symbionts, living machine phalanx, and, of course, the magnificently malevolent kytons! 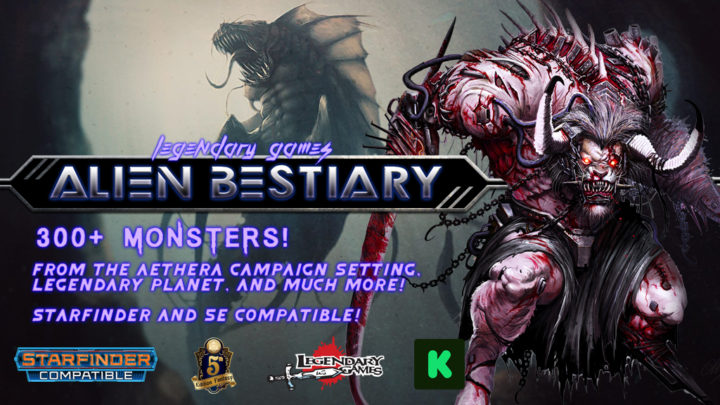 That promise of 200 marvelous monsters is just the starting point. As our Kickstarter goes along, we’ll be adding tons of terrific space-dwelling monsters from across the fantasy/sci-fi legendarium, from insidious intellect devourers and aboleth to parasitic viper vines, brain-eating neh-thalggu, space-warping hounds of Tindalos, murderous gugs, lethal lunarmas, a plenthora of robots,  and spectacular star-soaring solar dragons! Best of all, when you back this project YOU get to help decide which monsters make the cut! Vote early and often for your favorite featured creatures as we keep adding more and more to this beautiful book!

But wait, that’s STILL not all!

This project will go as high as you send it, and if you push us far and fast enough, you might just get an Alien Bestiary 2 in the equation! If this project explodes into orbit and beyond, we don’t want you to sit there waiting for months on end as we hammer through an entire asteroid worth of material. When we hit a certain mark, we’ll cut loose the first Alien Bestiary like a booster rocket and get that book out to you right away while we continue to soar into the sequel!

Besides straight-up monster books to equip your campaign, we also are hard at work creating the Alien Codex, an expansive look at selected alien races featuring a variety of stat blocks for typical examples of those races across multiple levels, from okanta runebreakers and wasteland shamans to hetzuud slayers and void sorcerers, plus bonus content unique to each race in the vein of the Pathfinder Roleplaying Game Monster Codex. If we hit the marks we think we will, the Alien Codex will split like an embryo, giving birth to a twin product, the Aethera Codex, featuring rich and detailed campaign setting lore for each of the races of the Aethera Campaign Setting unique to that bounded stellar system that blends magic and technology with steampunk noir and cosmic horror! 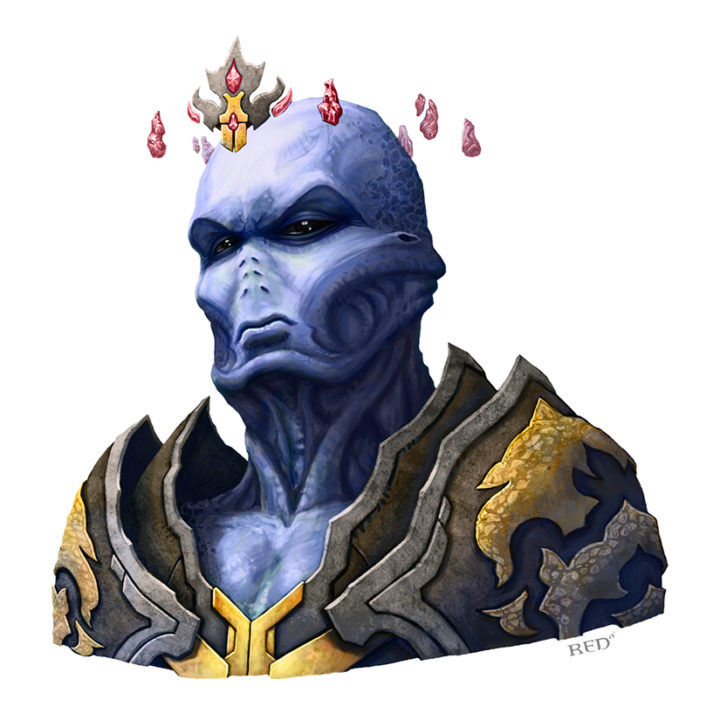 This project has been underway for some time, and we have nearly 200 characters and creatures complete for 5E and closing in on half that many for Starfinder Roleplaying Game already complete, with a ton of artwork already in hand or in process and a brand-new team working on this project so that progress on this new project will not derail completion of any outstanding obligations. The Forest Kingdom Campaign Compendium is almost ready to release, likely next week for Pathfinder backers and by mid-September for 5E, and the latest chapter in the Legendary Planet saga, Mind Tyrants of the Merciless Moons, is likewise heading into layout now that the GenCon madness has passed, though one of our layout artists suffered an injury at the con and may be out of commission for a while, so please pray for his swift and healthy recovery even as we bring on two additional layout people to help carry the load.

Of course you realize…

You know, Legendary Games doesn’t just stop running when we’ve got a big Kickstarter project going. In addition to all our regular awesome offerings, from fantasy adventures like The Horseshoe Calamity and Whisperer in the Dark to excellent accessories like Legendary Gunslingers and Legendary Brawlers for Pathfinder and Treasury of the Machine and Pirate Ships for 5E, alongside Legendary Worlds coming soon for Starfinder and 5E, we also are taking the new Starfinder Roleplaying Game classes like the soldier, mystic, and solarian and bringing them back to the Pathfinder Roleplaying Game! One good turn deserves another, and people wanting to add in the tasty new interstellar flavor to their classic campaign shouldn’t be left out in the cold either! While your eyes are on the skies, those aliens might just awaken right back at home!

Oh, and just one more thing:

THE HYPE ASTROTRAIN HAS NO BRAKES!!!