Skip to content
Home » News » The Abyss is overflowing with Demons Too!

Our very first Mythic Monsters product, released shortly after the Pathfinder Roleplaying Game Mythic Adventures rulebook itself had debuted, was the legendary Mythic Monsters: Demons! The only complaint we ever had about that book (which you can pick up this week for just 2 bucks as our TWO$DAY product of the week!) was that it just didn’t have enough demons in it. The time to rectify that situation is now! Behold, Mythic Monsters 35: Demons Too, comings this Friday! 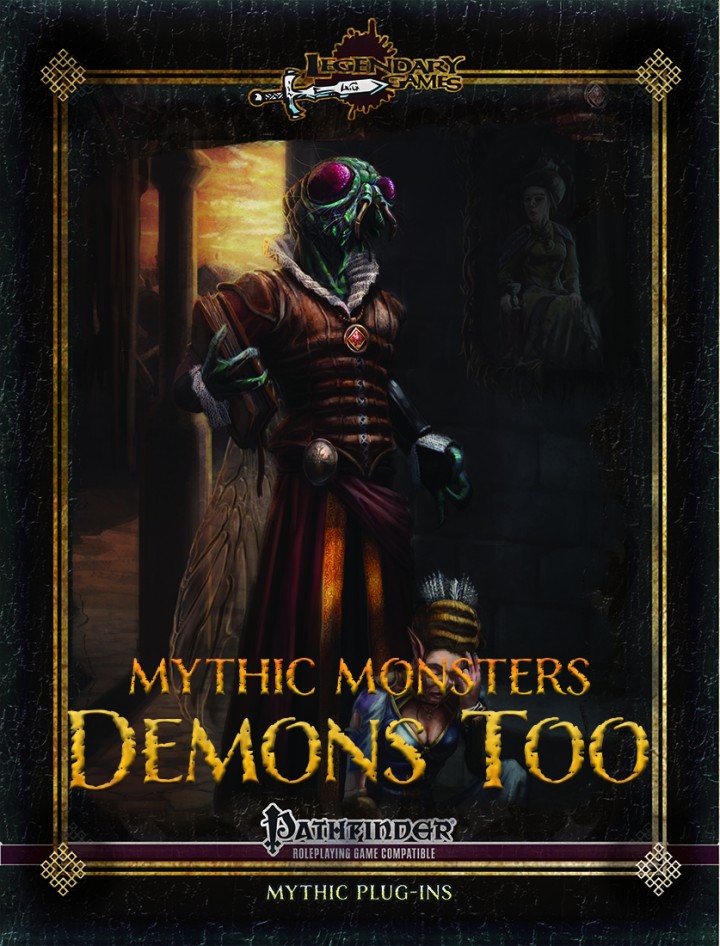 Our initial release covered almost all of the classic demons, but there are oh so many more within. Now, thanks to the combined talents of Jason Nelson, Alistair J. Rigg, Steven T. Helt, Todd Stewart, Jim Groves, and Nic Logue, we are proud to present the 35th installment in our magnificent Mythic Monsters series debuting this Friday in wide release. What lies within? BEWARE!

Mythic Monsters: Demons Too brings you an awesome array of abyssal adversaries ready to bring pain, torment, destruction, and woe upon the world and your heroes. These dastardly demons range from CR 3 to 23, including some of the lowliest of demonkind, the disgusting dretch and the half-breed cambion, as well as the savage footsoldiers of the Abyssal armies, the spiteful schir with their hewing halberds and the goat-horned brimoraks with their fiery hooves and burning blades. Truly hideous horrors lurk in the foul places of the Abyss, from the filthy and pestilential gibrileth to the foul and bestial kithangian, or even the lowly and loathsome abrikandilu who seek nothing but the wrecking of all things beauteous and fair. The seductively sinister coloxus conceals its insidiously insectile nature beneath a cloak of possession, while the deadly derakni revels in the company of the vilest vermin of the nether pits. The mightiest fiends are agents of death as often for their own kind as for others, as the prowling shemhazian preys upon all things weaker than itself while the subtle seraptis cultivates despair like a crop of death, leaving suicide and hopelessness in its wake, as does the warmongering gallu, lord of bloody battle. As if a dozen existing monsters were not enough, the brand-new skrekalga brings the spirit of absolute obsession and corruption to all it encounters. Add to that a delightfully disturbing piece of demonic fiction by Todd Stewart and you’ll be ready to unleash truly exquisite evil upon your heroes.