Today we are pleased to present the latest legendary installment for forest-focused campaigns, Legendary Villains: Dark Druids (5E)! This terrifyingly terrific tome contains a wealth of new options to make those harmless hermits in the woods into a sinister and deadly menace to any heroes foolish enough to wander in the woods and wild! If your campaign walks on the dark side, your GM might even allow your PCs to take some of these new feats, archetypes, spells, and more, or they might keep all the goodness (and badness!) to themselves, with ready-made druidical enemies to drop into any campaign! You can grab this creepy character supplement right here at the Legendary Games webstore, Open Gaming Store, Paizo, DrivethruRPG, and Amazon! 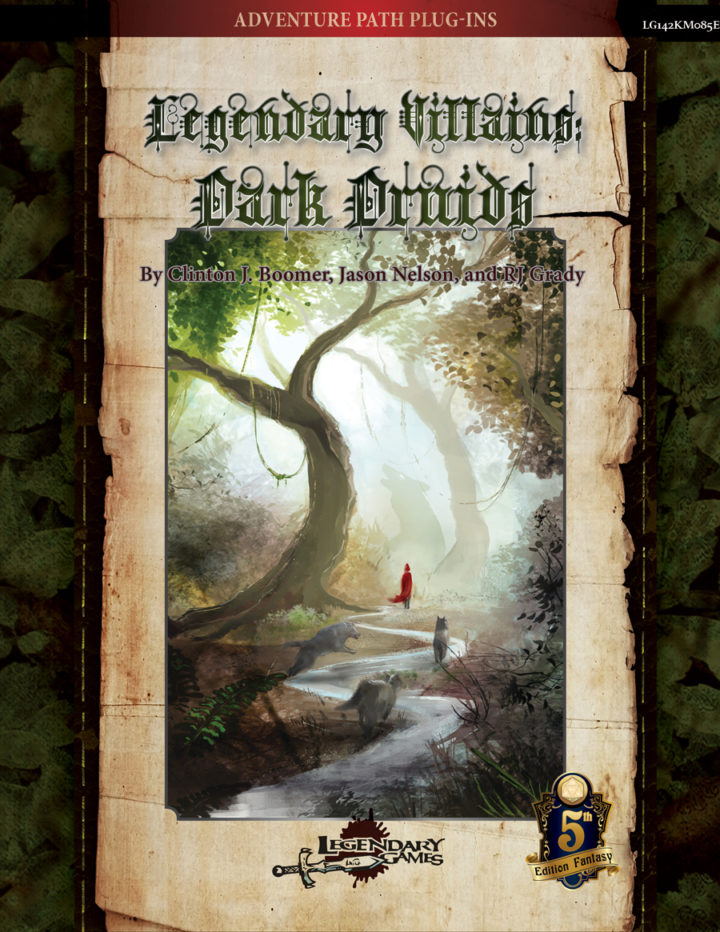 This killer compendium is an ideal companion to last week’s 5E Friday Fey-Day release, Beasts of Legend: Fairy Tale Creatures, featuring a dozen and one delightfully detailed creatures with powers and personality perfect for infusing the essence of the fey into your game! You also can grab that book at the  Legendary Games webstore, Open Gaming Store, Paizo, and DrivethruRPG and Amazon! 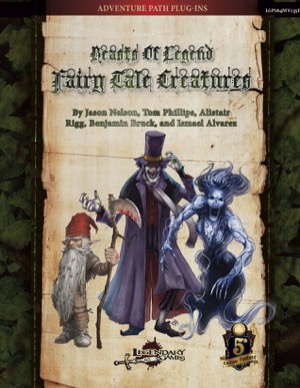 Of course, the Rule of Three is also a popular trope when you’re dealing with the fey realms, and yet a THIRD terrific fey-themed product is coming soon, Faerie Bargains (5E), which is in layout now! Check out the preview paragraph below to give you a foretaste of the fantastic fey flavor featured in this folio!

The magic and mystery of the fey is on display in Faerie Bargains! From Rumpelstiltskin to Rapunzel, fairy tales, myths, and legends all over the world are replete with tales of bargains struck with the sublime and sometimes sinister magical creatures from the realms beyond. Long life, wealth beyond imagining, true love, or whatever your heart’s desire all wrapped up in a promise and a price that seems but a trifle, until the bargain comes due and the fair folk come to collect. Faerie Bargains provides you a richly detailed system for using this classic fantasy trope in your 5th Edition campaign. You can design your own faerie bargains or use one of the over 40 sample bargains provided, from bounty of the wilds and unseen assistants to woven wealth, silent metamorphosis, fey queen’s ransom, and one with the land! Each bargain grants a benefit once payment is made, of course, but you’ll also find rules for hidden conditions, escape clauses, tokens, and more, along with how to research and negotiate bargains with different kinds of fey and unique magical items you might obtain in a faerie bargain or make with fey assistance, like the cauldron of autumnal bounty and sword of vernal light. Whether your heroes want to trade their dreams for the charm of magic, a gift of blood for accursed mercy, or their sanity itself for inspired perfection, you’ll find an amazing array of mystical covenants that bring fantastic new flavor to the fey in your game!

Of course, Pathfinder fans aren’t being left out in this flurry of fey-themed products, as Faerie Bargains is also coming soon for the Pathfinder Roleplaying Game, along with Forest Kingdom Archetypes, Royal Tournaments, and more! This is a fabulous time to be fey, whether you’re 5E or PF!

We are excited to announce the debut of the first supplement to the amazing Aethera Campaign Setting, a treasure trove of 10 richly detailed ready-to-use characters from all five races of Aethera: Aetheric Heroes! These incredible characters, complete with relationships and backstories that explore the lore and legacy of the setting, plus bonus rules elements too, are heading your way wherever fine Pathfinder products are sold on Friday, but you can get them exclusively RIGHT NOW at the Legendary Games webstore in PDF, print, or bundled together! And, of course, if you haven’t picked up the Aethera Campaign Setting yet, grab your PDF today and preorder the print version directly from us! 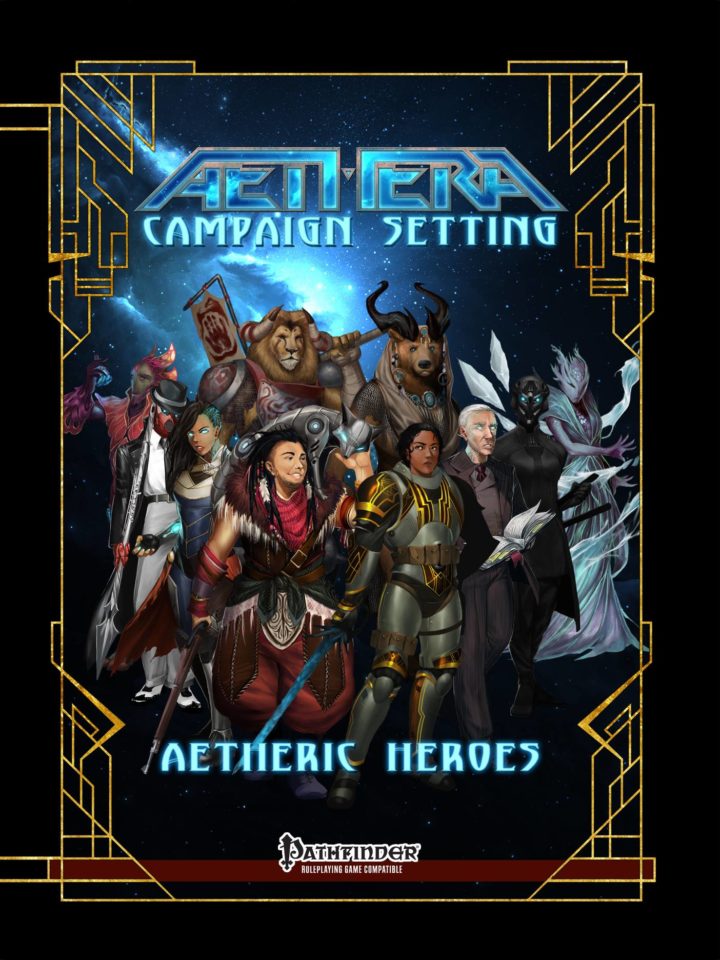 Of course, heroes come in all shapes and sizes for every campaign, so if you want to make your collection complete you don’t want to miss out on the amazing Top 10 Heroes Bundle! This incredible collection brings you all 10 of our Legendary “Heroes” products for JUST 10 DOLLARS! That’s 80 incredibly detailed and carefully crafted characters for campaigns of every kind, from faerie forests to the swashbuckling seven seas, and from Egyptian ruins and realms of Gothic horror to the farthest reaches of space!  Grab this bundle and get over 300 pages of material, with a retail price of almost $70, for just $10! Best of all, you can grab this amazing bundle at the Legendary Games webstore, Open Gaming Store, Paizo, or DrivethruRPG! 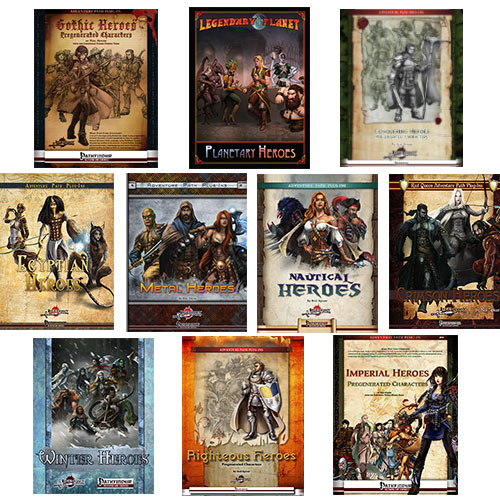 Finally, we wanted to give villains some love too. Now it’s true that we’ve produced plenty of bad-guy stuff over the years, from our earliest products dedicated to Gothic horror to a series of Legendary Villains products devoted to antipaladins, evil clerics, dark druids, wicked witches, and vigilantes! Coming soon, though, we’ve working with Mike Myler on a brand-new project he’s launching soon that is all about how good it is to be bad! 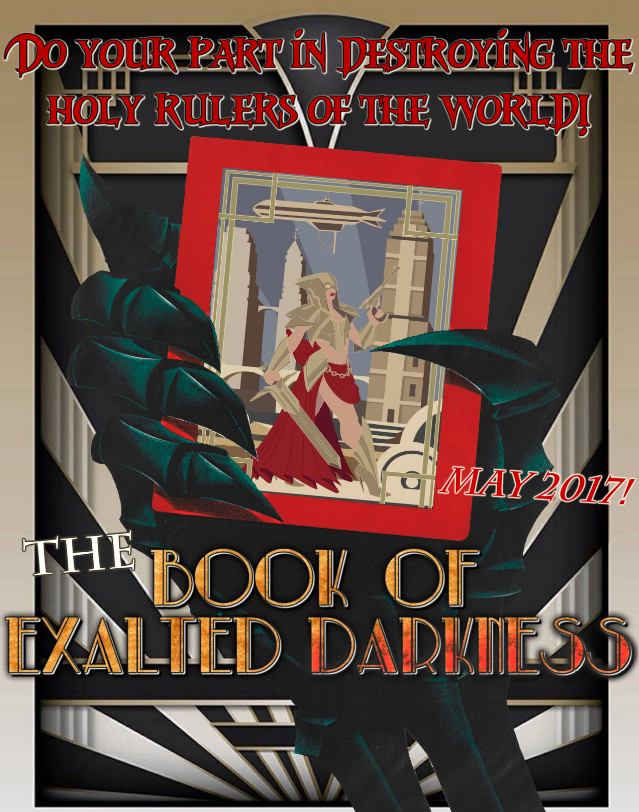 This Decopunk compendium is a detailed campaign setting that caters to PCs running the gamut from antihero to omnicidal maniac, with companion adventures, rules for running evil PCs, and a bonus goal of an extra book for those lily-livered so-called heroes that would dare stand in their way. Check it out coming soon!

Long ago the world’s “heroes”–Tucker the Great & Co., The Order of the Shining Stone, and The Golden Redeemers–smote all of Askis’ evils, beating back corruption and nearly purging it from the planet. Centuries have passed since their victory and life has prospered, the modern world developing into a drone of well-meaning bureaucracy staffed by do-gooders and enjoyed by simpletons. All of their wonders are powered by a gift from deific beings that dwell in other realms, a substance known as inaequa that extends the lifespan of creatures with good in their hearts.

You, however, are not among them.

Your heart is as black as the night and twice as cold, the lengths to which you will go to achieve your goals much further than any of Askis’ weak-willed heroes would even consider. It is your destiny–no your right–to tear it all down, destroying civilization as a means to gain great power, exact terrible revenge, simply revel in the chaos of mayhem, or take the reigns of authority by force.

This Friday, we are delighted to debut the first Legendary product from the prodigious pen of Carl Cramer, with a brand new hybrid character class – The DOOMGUARD! 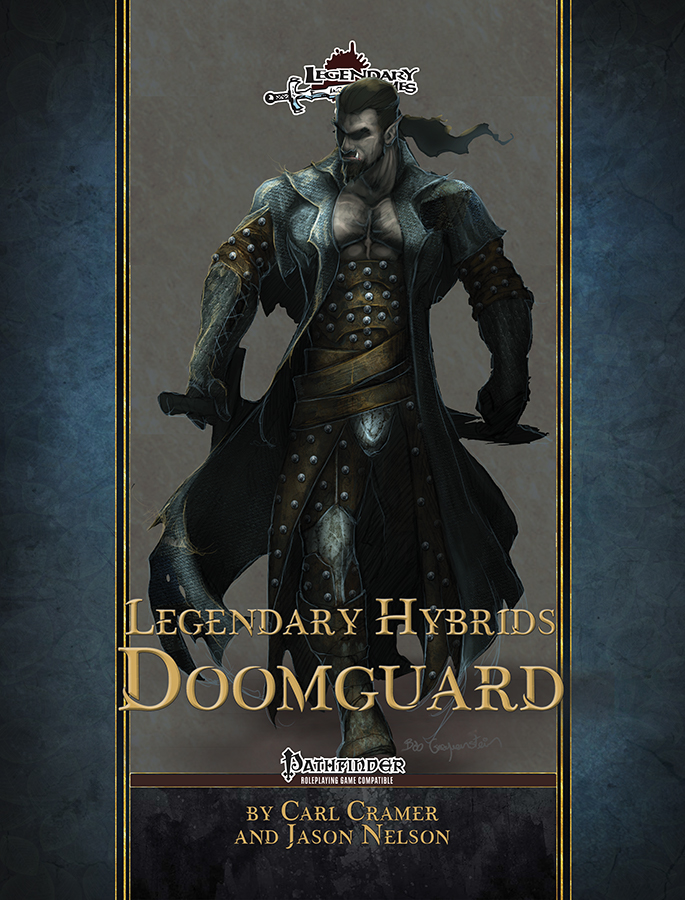 Legendary Hybrids: Doomguard is the latest volume in our series of class-focused player supplements, introducing a new series of hybrid classes like those in the Pathfinder Roleplaying Game Advanced Class Guide that blend the core elements of two different base classes into a unique synergy all their own. The Doomguard brings you a 20-level hybrid class that combines the deadly hunting skills, specialized combat prowess, and focused wrath of the ranger with the glorious defiance and battlefield of the cavalier, with a special twist: a terrible and dire doom that follows him like an oracle’s curse and binds him to his fated enemies at whose hands he is doomed to die! You can select from 45 different dooms, from maimed and blinded to powerless prophet and stigmata! You’ll also find favored class bonuses for core races and a quartet of amazing archetypes, from the dauntless and daring challenger, the defensive bulwark of the doomwarden, the fey foundling orphan with a forgotten lineage but connections to the mystical world of the fey, and the dread raven banner with a death wish that defies all who stand in his path. If you’ve ever wanted to play a warrior with a dark destiny crawling from behind and even as it drives him onwards to meet his fate for death or glory, pick up this 38-page Pathfinder character class supplement today and Make Your Game Legendary!

This new class will be available everywhere this Friday, February 24, but it’s far from the only class-focused supplement we have in the hopper! Also in layout you can look forward to two more terrific class books in the weeks to come!

Legendary Kineticists II unleashes the true potential of the kineticist class with a vast array of new kinetic options, starting with 8 amazing archetypes for both kineticists, like the onslaught blaster and telekinetic bladeshifter, as well as for other classes like the planar custodian druid and order of the scion cavalier. You’ll also find dozens of new infusions, wild talents, and kinetic feats and spells to enhance your kineticists of every specialty. In addition, you can expand the bounds of kinetics like never before with the kinetic mystic prestige class, variant multiclassing for kineticists, and a complete 20-level rebuild of the core kinetic class, the legendary kineticist! On top of everything else, you will also find Trueno, herald of the White Sky, a richly detailed kineticist master complete with combat tactics and a compelling history and personality, to show how these powers play at the table in a ready-to-use character you can drop right into an existing game or even build an entire campaign around.

Legendary Villains: Wicked Witches brings you an incredible resource for the best of the worst when it comes to sinister spellcasters for your Pathfinder Roleplaying Game campaign. Within you’ll find a ton of great new options for witches, including archetypes like the consort of fiends, curio collector, and shadow sister, along with the terrifying hag matron prestige class, complete with special abilities unique to each type of hag. Wicked witches can swear oaths to their eldritch patrons, gaining power through their devotion to natural forces like frost and waves, or to corrupt principles from lies and destruction to hedonism and madness! You’ll also find new hexes like the haruspex and skull sentinel and witch-themed magic items like the broom of chastisement and toxic cauldron. Finally, for witches who want to start play with an otherworldly familiar, you’ll find over a dozen lesser versions of exotic familiars like quasits, imps, rakshasas, and shadow drakes!

That’s three thrilling class supplements, in addition to incredible new adventures like our first Legendary One-on-One adventure, Orphans of the Hanged Man by Michael Allen and Matt Goodall, the long-awaited release of Legendary Planet: Dead Vault Descent by Matt Goodall, the magical marketplace of Treasury of the City by Loren Sieg, Victoria Jaczko, and Jason Nelson, the fantastic 5E Faerie Mysteries by Todd Stewart, Jason Nelson, Alistair Rigg, and David N. Ross, and much, MUCH more! 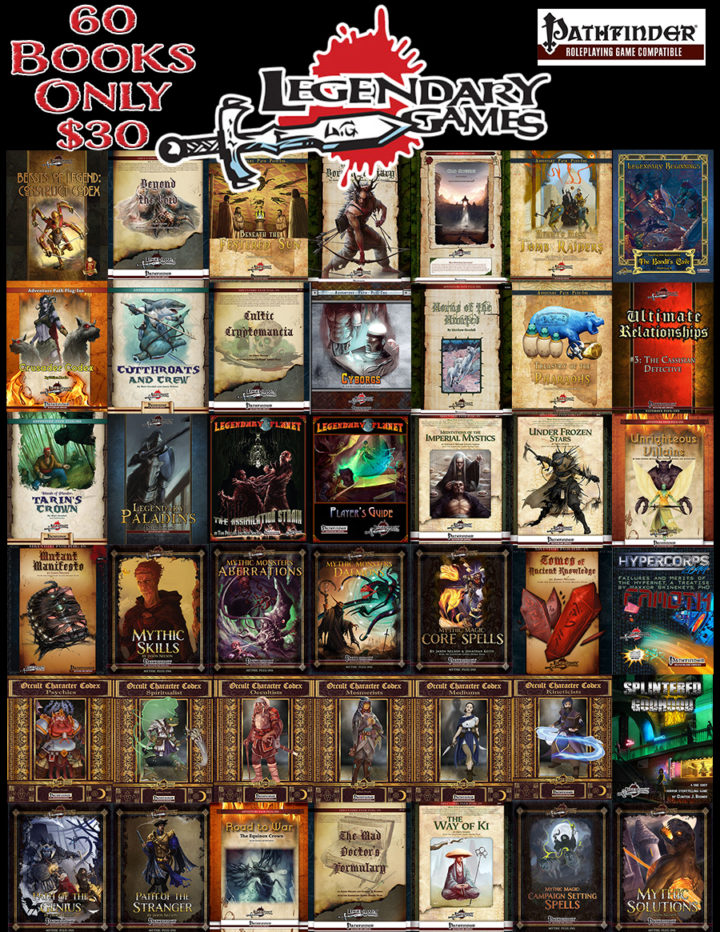 We are pleased to present the first full-sized supplement for the Red Queen Adventure Path, with Legendary Villains: Vigilantes, a sinister yet spectacular assortment of archetypes, feats, items, a new prestige class, and more material for intrigue and urban adventures! You can pick up this 40-page accessory at the Legendary Games webstore, Open Gaming Store, Paizo, DrivethruRPG, and Amazon! 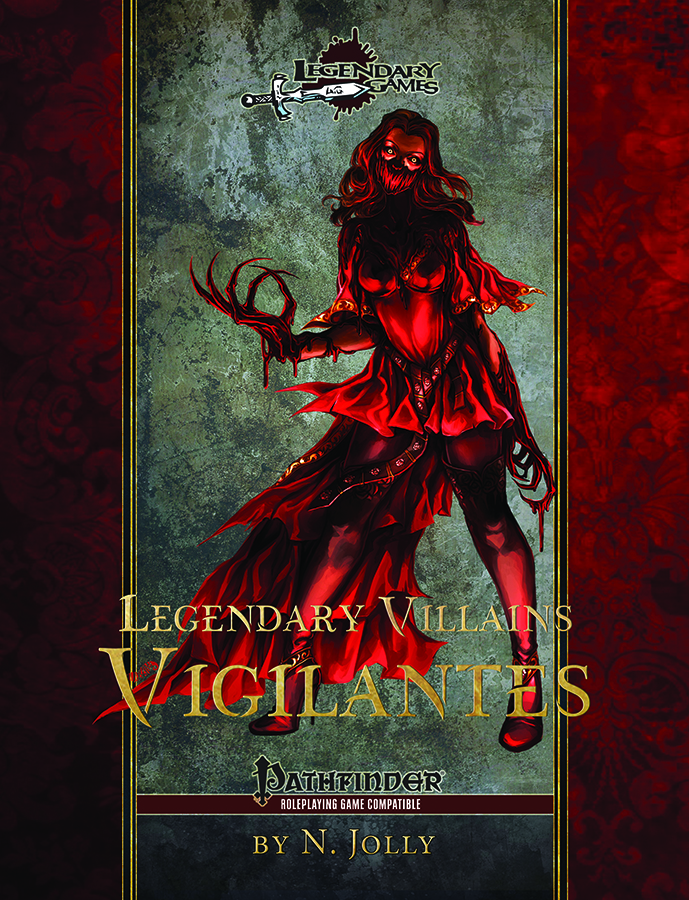 But wait, THERE’S MORE! When it comes to getting Red, we are also delighted to debut the latest installment in the Mythic Module Monsters series, Red Throne 3, featuring marvelous mythic versions of the bloodlettingly beatific upasunda asura, the undead elephant rajput ambari, the cute and clever house drake, the howling and fever-mad scarlet macaque swarm, and the malevolent mastermind maharaja rakshasa, all available for just $1.99 at the the Legendary Games webstore, Open Gaming Store, Paizo, and DrivethruRPG! 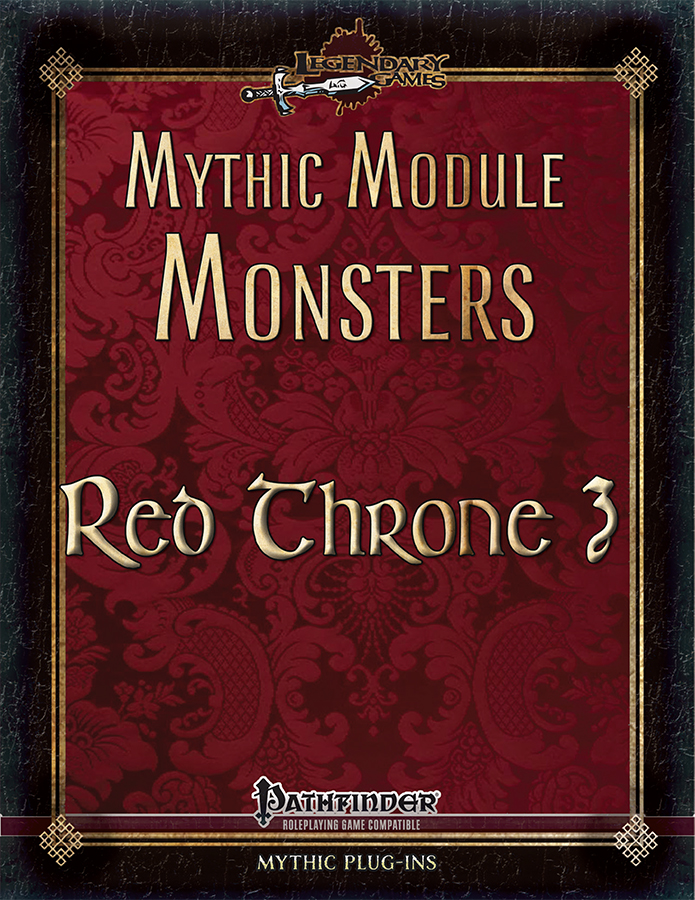 And, of course, we are one week into our amazing NOVEMBER 20 FOR 20 SALE, with 20 5th Edition PDFs, valued at nearly $120, over 550 pages, for just $20! You can grab this incredible value now through the end of November at the Legendary Games webstore, Open Gaming Store, Paizo, and DrivethruRPG! 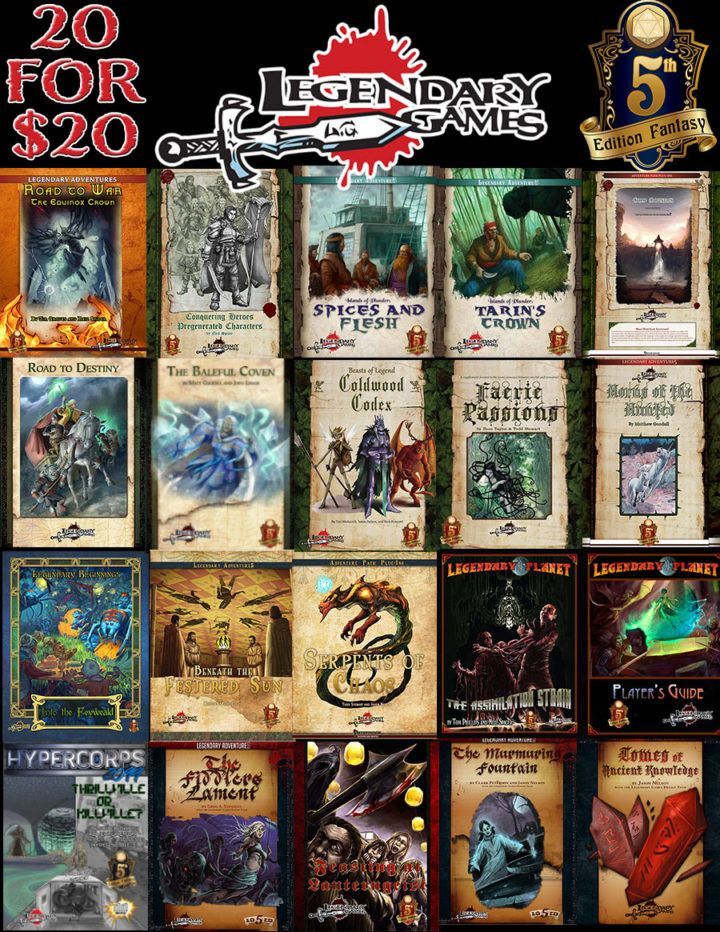