The Legendary Planet Adventure Path just added a new adventure! Blasting past the 600% funding mark, we this magnificent sword and planet AP is now at around 500 pages of content and climbing with the recent addition of Steven T. Helt’s aquatic adventure, The Depths of Desperation!  With just under two weeks to go, we wanted to reach out again to all of the Pathfinder and 5th Edition fans out there to help spread the word and get involved in an ambitious and amazing adventure! 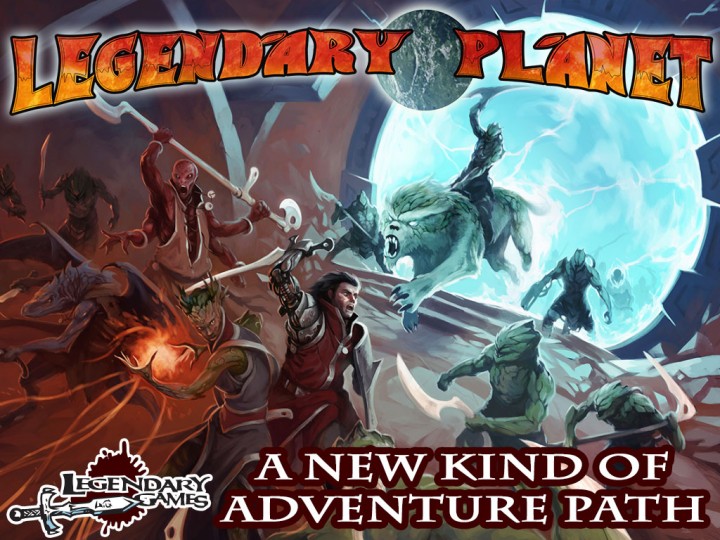 Take your campaign OUT OF THIS WORLD!

The core concept of Legendary Planet is that it is a “sword and planet” adventure path, the kind of interplanetary fiction best exemplified by Edgar Rice Burroughs’ Barsoom novels featuring John Carter, Dejah Thoris, Tars Tarkas, etc., though pulling in elements of other visionary authors from pulp fantasy and sci-fi from Jack Vance to Flash Gordon to Heavy Metal magazine. At its heart, this is still a fantasy story, through playing with many of the tropes of sci-fi. Technology exists alongside magic, and high-tech is similar in rarity to permanent magic items, but the focus is on the exotic planets themselves. There are no starships or hyperdrive, and you’ll be packing your sword alongside your needler pistol or blaster as you ride your alien steed in search of a stargate that might take you to a distant system.

We have an impressive lineup of contributors on this project, all of them veteran adventure-writers as well as a team of experts in both 5th Edition and Pathfinder who are working to make sure that the play experience is equally dynamic in either system.

We think this AP offers a great opportunity to open up the possibilities of 5th Edition to new styles of adventure beyond traditional fantasy, while still embracing the roots of the game. D&D has a long history of crossover with sci-fi and technology, all the way back to 1st Edition and even before it with Dave Arneson’s Blackmoor setting, and we think this is going to be a fantastic addition to the newest edition of the game. We have an experienced team that has a history of delivering Kickstarters on time (or early) with awesome content, so you can be confident that we will do the same here!

We are hard at work hammering out the first full adventure as well, and if everything breaks right we may have it ready in time for the end of the Kickstarter on July 27th, but more likely it will be available in August after GenCon.

We hope you take a good look at Legendary Planet and climb aboard for a ride that we guarantee will be out of this world.

The adventures of the Legendary Planet Adventure Path are described below:

The Assimilation Strain by Tom Phillips and Neil Spicer – a prelude adventure to introduce 1st-level characters on any fantasy world to a broader universe of insidious alien invaders.

To Worlds Unknown by Jim Groves – An adventure for 2nd to 5th level characters, featuring a breakout from an interplanetary prison and the exploration of a crime-infested hub world that could provide a gateway home, or draw the heroes deeper into a web of alien conspiracies and cryptic alliances.

The Scavenged Codex by Mike Shel – An adventure for 5th to 8th level characters across a post-apocalyptic desert planet in search of the forgotten lore of near-mythical creator races, now jealously guarded by corrupt cultists of the wastes.

Dead Vault Descent by Matt Goodall – An adventure for 8th to 11th level characters venturing forth to the blasted surface of a tidally locked world, half scorched by eternal sunshine and half frozen by endless darkness. The heroes must brave the primitive swamps of the habitable zone and penetrate the vast catacombs beneath in search of the keepers of hope to unlocking the mysteries of the ancients.

Confederates of the Shattered Zone by Richard Pett – An adventure for 11th to 14th level characters exploring the post-industrial ruins of an asteroid field, all that remains of a devastated world once held by the descendants of the creator races but bombarded into destruction. Can they recover the tools they need to form a resistance against a rising tide of evil?

Each of the above adventures (other than the prequel) contains not only a full-scale adventure of approximately 64 pages, but also an additional 32 pages of bonus material, including bestiaries of brand-new monsters, planetary gazetteers, and bonus articles detailing races, religion, equipment, character options, and more by guest authors like Sean K Reynolds and the Sasquatch Game Studio of Rich Baker, David Noonan, and Stephen Schubert, as well as an ongoing fiction series by award-winning author Chris A. Jackson.

The Depths of Desperation by Steven T. Helt – An adventure for 14th to 17th level characters who must confront an invasion that has already begun as the heroes venture into a watery world inundated by a sinister race of aquatic conquerors. What will they find left behind, and can they halt the aliens’ unstoppable advance?

The full adventure has been unlocked, and every $2000 we’ll be adding an additional bonus article, including another guest author in veteran designer Patrick Renie at $42,000… and just wait until you see who’s coming at $50,000! 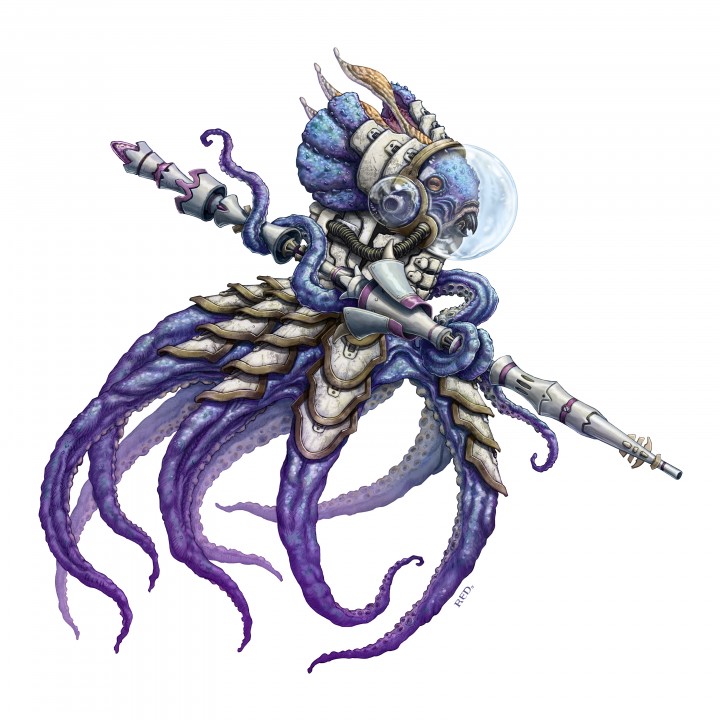 Only two adventures remain to be unlocked over the course of the final two weeks of our Kickstarter campaign:

Mind Tyrants of the Merciless Moons by Tim Hitchcock – An adventure for 17th to 19th level characters set among the wandering moons of a gas giant seeded with psionic lifeforms, as the heroes plumb the depths of the mind in search of weapons to turn back the forces of evil.

To Kill a Star by Jason Nelson – An adventure for 19th to 20th level characters that takes characters to a massive Dyson sphere constructed around a waning star to confront the cabal of alien zealots trying to bring the universe to utter submission… or total annihilation. 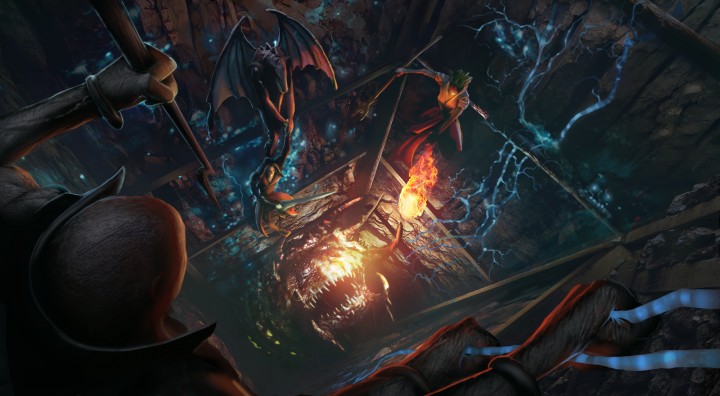