Skip to content
Home » News » SUMMER PREVIEWS #22: Where the WEIRD things are!

With Mythic Monsters: Aliens on final approach, it’s time to turn our eyes ahead to the next batch of magnificent and malevolent mythic monsters to menace your martial and magical heroes. Really, the last several volumes in this series have dealt with creatures that you might call misshapen or mutated, whether they be ordinary creatures made into awful amalgams or other kinds of extraordinary magical beasts, or things that are almost but not quite normal humanoids, becoming monstrous humanoids instead; or creatures that are literally out of this world, with bodies and minds very different from those we know. Still, we haven’t yet touched on one category whose defining characteristic is that they are Just. Not. Right. Their existence constitutes a violation of the natural order. They are not just different, they are aberrant! 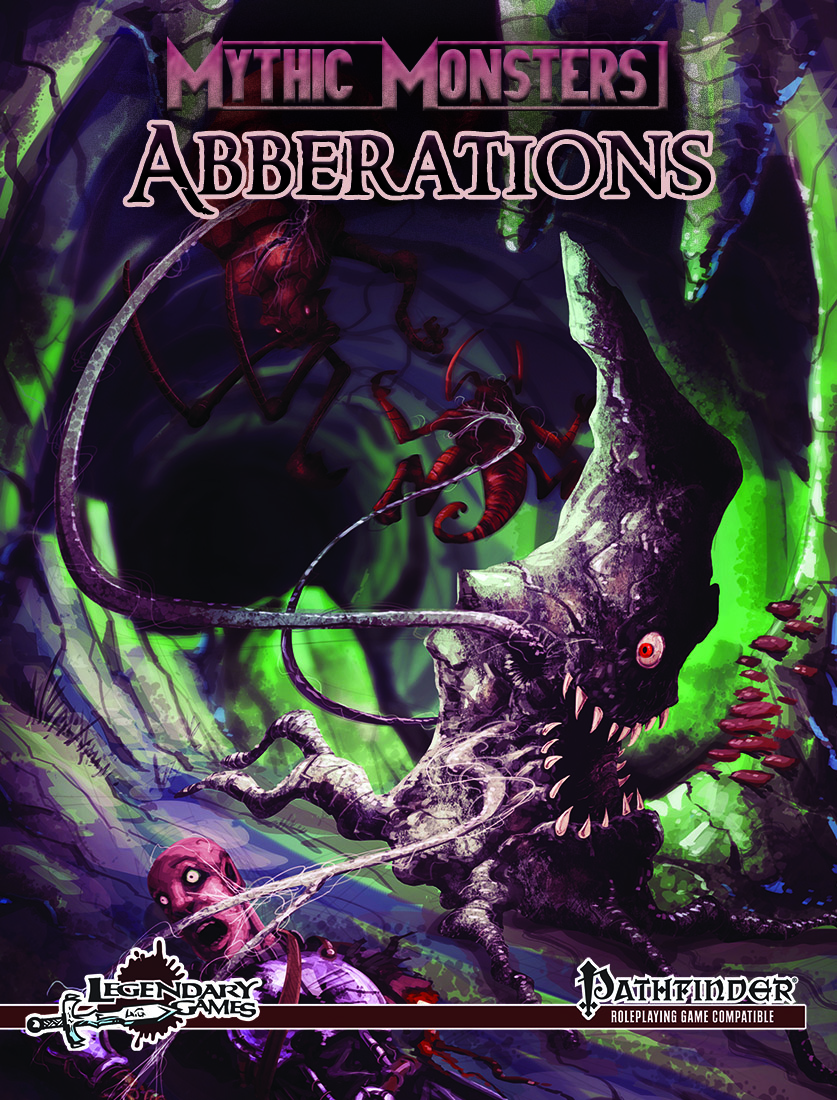 Thanks to artist Chris McFann for bringing us this depiction of deadly dungeon denizens from the earliest days of RPGs. Ropers and rust monsters and DEAD ADVENTURERS, oh my!  But they’re not alone. Oh no, behold the list of terrifyingly twisted aberrant monsters you’ll find between these pages:

TABLE OF CONTENTS BY CR

I have to admit for the record that the froghemoth has been one of my favorite RPG monsters ever since I first saw it back in Expedition to the Barrier Peaks. It’s just so completely WTF? as a monster, and that name is so perfectly terrifying, everything about it just makes me smile, and bringing it to life here was a decided pleasure, but there are a ton of great monsters here. In fact, I just used the manuscript version of the mythic wolf-in-sheep’s-clothing in my home game and the reactions of my players was suitably horrified. There’s plenty more where that came from, though, so next preview we’ll take a closer look at that brand-new monster, the gelatinous zyoselak, courtesy of the most fevered lunatic ravings Alistair Rigg and the rest of the Legendary Games design team!

As an aside, you’ll note that this cover has been done in the “new style” we offered up for public commentary with the previews for Mythic Monsters: Aliens. After some consideration, we’ve decided that we are going to do a number of products with both the new cover treatment and a hybrid version of the new and the old (essentially similar to what you see in the front cover for Path of Dragons). You’ve spoken with your voices, and now you’ll have a chance to vote with your dollars. Legendary Games faced a similar conundrum on the subject of landscape or portrait orientation for our products, and while both sides had vocal proponents the portrait versions outsold landscape almost 3 to 1; hence, we started doing just portrait. We’ll see how things play out similarly with cover styles. The power is YOURS!