Yesterday we ran down the list of the characters to expect in our upcoming Nautical Heroesfrom Neil Spicer, but today we’ll take a closer look at one of them in particular. The depth of detail in the background will have to wait a bit for Neil to finish perfecting it, but I thought you might enjoy a quick look at what you can expect in terms of the stat block, including alternate racial abilities and campaign traits to tailor the character and really ground (amusing choice of words in a nautical campaign) her in the setting of the AP.

At will—know direction (if near a sizable body of water)

Feats Alertness (when Caramia is within arm’s reach), Extra HexACG

Arcane Focus (Ex) Miri’s family has a long tradition of producing arcane spellcasters (both wizards and witches), and she was raised with the assumption she would be destined to become a powerful magic-user, with little need for mundane concerns such as skill with weapons. As a result, she gains a +2 trait bonus on concentration checks to cast arcane spells defensively. This elven racial trait replaces weapon familiarity.

Charming (Ex) Blessed with good looks, Miri has come to depend on the fact that others find her attractive. She gains a +1 trait bonus when she uses Bluff or Diplomacy on a character that is (or could be) sexually attracted to her, and a +1 trait bonus to the save DC of any language-dependent spell she casts on such characters or creatures.

Dreamspeaker (Ex/Sp) Miri has the ability to tap into the power of sleep, dreams, and prescient reverie. Elves with this racial trait add +1 to the saving throw DCs of spells of the divination school and sleep effects they cast. In addition, Miri may use dream once per day as a spell-like ability (caster level is equal to her character level). This racial trait replaces elven immunities.

Know Direction (Sp) So long as Miri is near a sizable body of water (at least a lake with a diameter of 1 mile or more), she may cast know direction at will as a spell-like ability.

Spirit of the Waters (Ex) Miri has adapted to life in tune with the sea, gaining a +4 racial bonus on Swim checks with the ability to always take 10 while swimming, if she chooses. This connection also allowed her to choose Aquan as one of her bonus languages, and she is proficient with the longspear, trident, and net. This racial trait replaces elven magic and weapon familiarity.

Touched by the Sea (Ex) Miri has always felt the call of the sea and her blood surges with the ebb and flow of the tides. Somewhere in her ancestry, an aquatic elf impacted her bloodline and now she’s as comfortable in the water as she is on land. Miri gains a +1 trait bonus on Swim checks and Swim is always a class skill for her. In addition, her penalties on attack rolls made underwater are lessened by 1.

Background: Miriel Kalantee (MEER-ee-uhl KUH-lan-TEE) reveres the goddesses of trickery and revenge, storms and pirates, and travelers and dreams, as well as an unknown patron which she believes to be an ancient sea monster or old god of the depths.

And since we showed you the sketch yesterday, we’d be remiss if we didn’t show you the final version of this lovely lass from the lower latitudes! 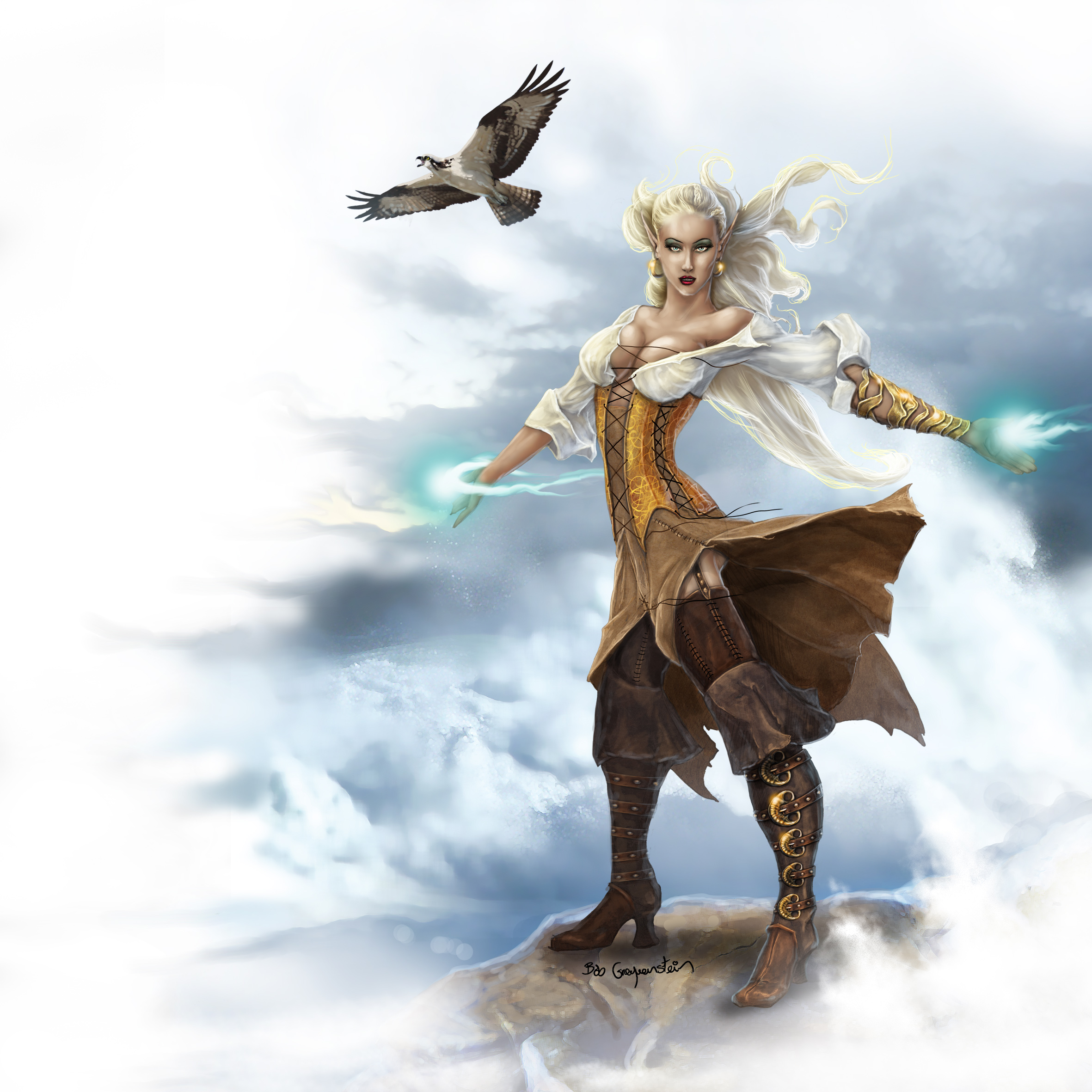 I might have to steal her boots; my wife would love them!