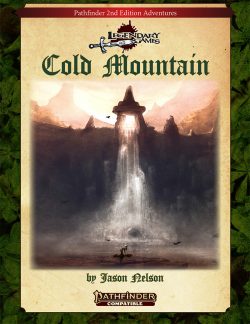 Can You Mend A Frozen Heart?

A mother’s love is stronger than death, but love and death walk hand in hand when mortals cross paths with the immortal fey. Something has stirred up a fell and bloodthirsty power in the depths of the forlorn forest, and a bitter wind and mournful howls echoing from a lonely mountain bring a chilling dread to the wilds beyond the borderlands.

A goddess is angry, and her wrath heralds doom in the unforgiving lands of a savage frontier. Can the heroes find a way to make peace with the warlike clans of the lonely hills and quell the frightening powers of nature that threaten to rise up and devour scattered clan and nascent frontier kingdoms alike? With triumph and tragedy in the balance, do they dare ascend Cold Mountain?

Cold Mountain is a Pathfinder Second Edition adventure for 4th-level characters that takes the heroes past the reach of civilization, coming face to face with strange and primitive folkways and faerie powers. This adventure brings an evocative atmosphere of Dark Ages-style barbarism and mysticism into a traditional fantasy campaign, delivering challenges to overcome with words and deeds as well as on the field of battle. Your players will need cunning, guile, and a silver tongue to succeed where their magic and their sword arms may not prevail. Grab this 45-page PF2E adventure today for your home campaign or to complement the upcoming official "maker of kings" anniversary adventure path and Make Your Game Legendary!