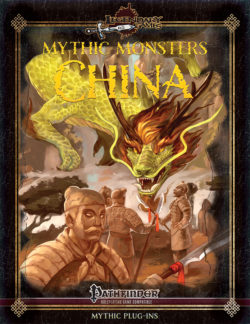 Imperial Adversaries Await!
Mythic Monsters: China brings you an amazing and exciting assortment of monsters from the vast mythology of China, from the deserts and mountains of the desolate west, the mighty river valleys, and the dynastic cities and fields and forests of the coastal plain. Drawn from thousands of years of history and lore, these creatures range from CR 3 to 26 and include wise and benevolent imperial dragons like the graceful tienlung sky dragon and mighty jiaolung sea dragon, as well as the savage dilung forest dragon and fearsome futsanglung underworld dragon, and ruling over all and maintaining the watchful balance between them the resplendent lungwang sovereign dragon. Of course, Chinese myth and legend is about far more than ancient and magical serpents, featuring loyal magical servants like the celestial foo lion and deathless guardians like the terra-cotta soldier and equally deathless yet blood-hungry hopping vampires, the jiang-shi. The Chinese legendarium ranges from minor menaces like the mischievous xiao flying monkeys alongside apocalyptic aberrations like the horrific hundun, and it also features an array of misshapen composite creatures like the patchwork yaoguai and the terrifying jinmeju tree bearing a fruit of horrible heads. As if a dozen existing monsters were not enough, the brand-new nian is a powerful predator that haunts and hunts at the turn of the year, only to be driven back each Chinese New Year with fireworks and festivals. In addition to the featured creatures, we bring you an array of amazing artifacts and fantastic feats gifted from the imperial dragons of the Orient, each one suitable for mythic and non-mythic heroes alike!

This all-new 32-page supplement by Jeff Lee and Loren Sieg is a terrific complement to the Mythic Monster Manual, with over 220 mythic monsters and an awesome array of monster-focused abilities, feats, and more for your Pathfinder game! Pick up both books today and Make Your Game Legendary!