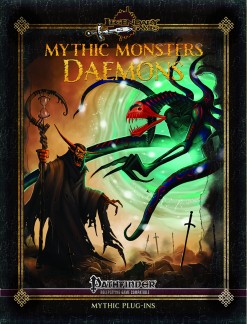 Mythic Monsters: Daemons brings you a dozen and one of the foulest fiends to ever darken the doorstep of the deepest dungeons. Servants of the Four Horsemen of the Apocalypse and harbingers of famine, death, disease, and war, daemons occupy an interesting middle ground between the calculating and insidious devils and the ravening and savage demons. They truly want what's worst for everyone, with a nihilistic amorality that embodies every awful instance and element of death, pain, suffering, grief, and loss in living form. There is no peace, no hope, no light, no faith, no favor, and no escape. Only an inexorable grinding down to nothingness will satisfy their entropic appetites. From CR 3 to 22, we bring you dangerous daemons of every description, from minor magical minions like the cacodaemon, venedaemon, and ceustodaemon that might answer the call of mortal summons thinking their mystical might makes them masters of the lowest servants of Abaddon, to the guardians and masters of the River Styx, the hungry hydrodaemons and the cadaverous thanadaemons. The latter deacons of death are joined in the hierarchy of Hades by the leukodaemon spreaders of pestilence, the meladaemons, scions of starvation, and the purrodaemon warbringers. Some daemons seem almost alien, like the insane insectoid derghodaemons and the tentacular planewalking astradaemons, but all live for the thrill of the kill, whether as brutish bruisers like the piscodaemon or the seemingly forlorn yet fearsome vulnudaemon. As if a dozen existing monsters were not enough, the mighty and megalomaniacal ignodaemons are formed from fallen souls of earthly despots who incarnated to evil now govern fiefs of their lesser kin in an elaborate feudal tyranny in the service of the daemonic deacons and harbingers, balancing subtle skills of sedition with the brutal fist of power. The cruelty of these evil overlords is revealed in short fiction from Todd Stewart, in an interview with the archdaemon of poisons and incurable affliction, with every ophidian utterance envenomed with evil.

This all-new 30-page supplement is a terrific complement to the Mythic Monster Manual, with over 220 mythic monsters and an awesome array of monster-focused abilities, feats, and more for your Pathfinder game!