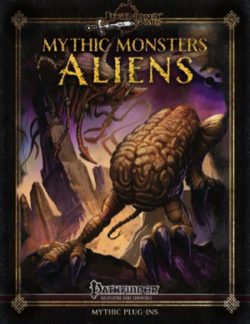 The 17th volume in our Mythic Monsters series, Mythic Monsters: Aliens brings you a dozen and one monsters that are truly out of this world. A handful are indifferent to the plight of terrestrial races, simply exploring with dispassionate efficiency and adapting themselves to new worlds like the robotic adaptoid or the floating brethedan. Others are frequent travelers between worlds, either physically like the wily witchwyrds and the mighty xanthos, or by sending their thoughts out among the cosmos like the contemplative. Some alien races usually remain on their own worlds, ruling kingdoms or clanholds like the soaring dragonkin and the gun-toting shobhad, while the mysterious flumph searches out dangerous invaders from beyond the tapestry of night. Some alien invaders simply seed worlds with dangerous propagation, like the spiny lunarma or the towering moonflower, but others are far more sinister, like the apocalyptic akata plagues or the insidious incursions of intellect devourers. The brand-new qomok is an alien THING that can absorb and assimilate the aspects of virtually anything, taking the semblance of other living things long enough to invade and spread its deadly seed like an all-consuming virus.

On top of these extraterrestrial enemies, Mythic Monsters: Aliens also introduces the alien subtype to help characterize creatures from planets beyond your own, notes on alien magic items, and 10 alien-themed spells (including mythic and non-mythic versions of the brand-new identify technology spell to help make sense of those alien artifacts your PCs are bound to discover). The 13 alien beasts contained herein, ranging in CR from 1 to 17, are updated for the mythic rules, and when we say updated we mean complete stat blocks, yes, but more than that every one of these massive menaces has its own unique and exciting new mythic abilities, from a mythic adaptoid's electrostunner and deflector screen to the cosmic awareness of a mythic flumph!