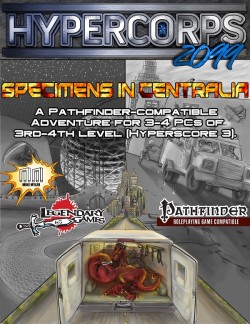 The Ms. Grey that hired you for this job didn't give a lot of details, but the place you're headed to has been off the proverbial map for over a century now, a patch of forsaken wilderness called Centralia. Reading over the details of what you're after again, you hear something distinctly unnatural from outside the vehicle—the sound of throttling motorcycles and a few whooping hollers. Looking out the window nearly gets your head blown off as a mutant freak on a low-rider blasts at the van with a beat up revolver, dropping back so another biker can take a clean shot just as your driver starts to weave on the road!
Specimens in Centralia is a Pathfinder Roleplaying Game compatible adventure in the world of Hypercorps 2099. The module begins with the operators (the PCs) en route to Centralia's coal mines, the sight of a fire raging since 1962. Within is their quarry, but how they take it down and bring it back to Pittsburgh plays a large role with how much they'll get paid!
While this 26-page adventure is ideal for a party of four operators of 3rd-4th level (hyper score 3), it is also suitable for regular PCs of 7th-8th level.
Inside Specimens in Centralia you'll find:
tc-thumb-fld: a:2:{s:9:"_thumb_id";s:4:"6368";s:11:"_thumb_type";s:5:"thumb";}
layout_key:
post_slider_check_key: 0