Skip to content
Home » Shop RPGs » Orientation » Beyond the Void 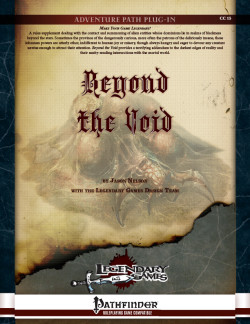 Note: This product is a part of the Gothic Campaign Compendium along with several others.

Beyond the Void provides a terrifying addendum to the darkest edges of reality and their sanity-rending intersections with the mortal world. This rules supplement deals with the contact and summoning of alien entities whose dominions lie in realms of blackness beyond the stars. Sometimes the province of the dangerously curious, more often the patrons of the deliriously insane, these inhuman powers are utterly other, indifferent to human joy or misery, though always hungry and eager to devour any creature unwise enough to attract their attention.

Ideal for alchemists, summoners, and wizards, and for anyone wishing to delve into the sanity-rending realms of cosmic horror.This product includes three new character archetypes, the deranged alienist (summoner), the intrepid aquatic bathynaut (alchemist), and the far-sighted iridic mage (wizard). Add to this the Crawler in Darkness and Summon Star-Spawn feats; nine new spells from alien contact and cosmic communion to deform angularity and embryonic implantation; and the new alien and embryonic creature templates, including four sample embryonic aliens to terrify your players: the embryonic aboleth, embryonic intellect devourer, embryonic neh-thalggu, and embryonic shoggoth!

Written by Jason Nelson, with art by Frank Hessefort and Tanyaporn Sangsnit, this 15-page product continues Legendary Games' tradition of bringing you outstanding content by the best authors in the business, combined with amazing art and production values and innovative layout design. We hope you enjoy using our products as much as we enjoy making them, and that you'll keep coming back again and again to Make Your Game Legendary!

Download includes two versions: one full color and one printer-friendly.