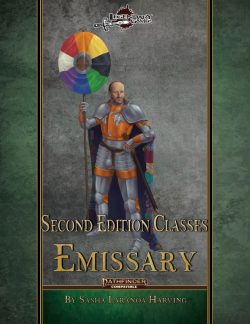 The emissary is an all-new class for Pathfinder Second Edition, melding the magic of arcane empires with the supportive skill of a trained ambassador. With five imperial origins from the knightly abjurant crusade with their bulky tornswords and defensive acumen to the fiery sands of flame with their regal war scepters and burning light, the emissary can master the social graces like no other. With more than 40 class feats from levels 1-20 like Catspaw Assault and Animal Sidekick, no two emissaries are the same! Whether braggadocious or cunning, a merciless intimidator or a gregarious gadabout, any emissary can brand their foes with their empire's mark, setting them up so their allies can lay them low. Plus, find the emissary multiclass archetype to splash some imperial graces into other classes, and several new mundane weapons used by those far-off empires. Grab this incredible new 26-page class book by veteran Pathfinder 2E author Sasha Laranoa Harving today and Make Your Game Legendary!