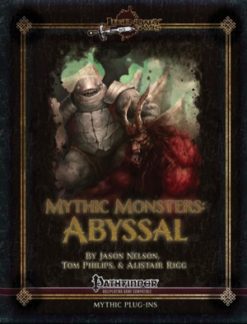 The eighth volume in our Mythic Monsters series, Mythic Monsters: Abyssal brings you a dozen and one Abyssal abominations from the deepest reaches of those infinite layers, where demons rightly fear to tread. Here you will find the eldest and fatherless qlippoth, the proto-demons spawned when the universe was young and that set in motion the devouring awfulness that is the Abyss itself. You will find also the demodands, godless mockeries forged by the cruelest titans, thwarted in their ascension to true divinity and raging against the heavens through their fiendish creations. Still other prowlers and predators of the plane of chaos and evil roam here, numbering twelve in all and updated for the mythic rules, and when we say updated we mean complete stat blocks, yes, but more than that every creature of chaos and emissary of evil has its own unique and exciting new mythic abilities, from a mythic baregara's terrifying challenge and beheading grapple to the faith-stealing strike and where is your god now abilities of a mythic noble slimy demodand!

This product includes mythic versions of all three types of demodands and five qlippoth, along with planar predators like the baregara and bebilith alongside deviant monstrosities that carry the tainted corruption of the Abyss with them into the material plane, like the terrifying kakuen-taka, covering CRs from 3 to 23. In addition to a dozen existing otherworldly foes, Mythic Monsters: Abyssal also contains an extensive in-character introduction to the warring and fiend-races of the Abyss in general, and the binding of the terrifying qlippoth in particular, with special runestone rituals for the binding of each. To top it all off, Mythic Monsters: Abyssal introduces an entirely new 13th mythic monster, the demon-devouring vermicious horror that is the ylrygoi qlippoth, ever on the hunt for the hosts in which to implant its shoggti tadpoles with its waving throng of stinger-necks akin in appearance to a headless hydra, if its heads were made of deadly scorpion's tails!