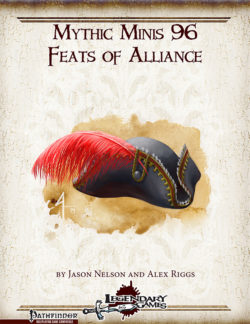 Feats of Alliance is the latest Mythic Mini devoted to exploring the subtle arts of intrigue, though such campaigns seem to focus so much on betrayal and trickery that it is often easy to forget that the goal of diplomacy and negotiation is much more about working together and finding ways to prevent or avoid such skullduggery. Forging friendships and loyalties that last are key to finding victory in a world where secrets and sedition are seemingly around every corner, and this PDF brings you 10 new feats to do just that, from Inspiring Bravery and Legendary Influence to Betrayal Sense and Unimpeachable Honor!

Mythic Minis are short, inexpensive products designed to take one rules concept or set of Pathfinder Roleplaying Game rules and bring them to you in a new way for the mythic rules, including converting existing rules as well as introducing entirely new rule options. Created by the same designers that helped bring you the official mythic rules, Mythic Minis skip the fluff and give you all crunch, all the time.

Nobody knows mythic like Legendary Games, and whether it's new mythic feats, class abilities, path abilities, magic items, or anything else, every Mythic Mini delivers a delicious dollop of dazzling design that will fill out your mythic experience one slice at a time. Check for a new Mythic Mini every Monday to make your game just a little more Legendary!