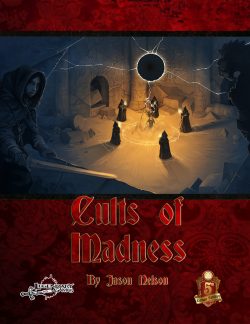 Sinister Secrets from Beyond

Cults are a classic element in fantasy from the historical to the horrific, and Cults of Madness explores the uses of cults of every kind in your 5E campaign, from secret sects that live in the shadows and prey upon the weak-willed or disillusioned dregs of society to the near-forgotten relic rituals echoing down from ancient times and still practiced by scattered adherents, covens, and rural traditions handed down from the oldest folkways far from the watchful eyes of the younger gods and civilized ideals of modern society. This book delves into ancient primitive rites and those calling out to the darkest edges of reality and the  sanity-rending eldritch entities whose dominions lie in realms of blackness beyond the stars. Cults of Madness is replete with rules elements to bring any cult to life, including 5 new sub-class options like the Alienist warlock, Demagogue bard, and Apostate paladin, along with over two dozen new feats and spells from Heart Ripper and Sacrificial Power to cosmic communion and torch-wielding mob! Plus, you get horrifying new creature templates for aliens and embryonic creatures crawling out of your PCs' skin and into their nightmares! Grab this 30-page 5th Edition horror accessory by Jason Nelson today and Make Your Game Legendary!