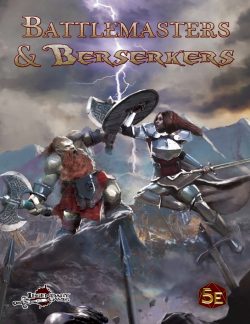 Battlemasters & Berserkers launches Monday, April 26 on Kickstarter and runs for two weeks! Check out this 10-page free preview here and sign up to follow the project (link on page 4 of the preview PDF and right here) and see the amazing extras available! Best of all, the PDF is ready for release immediately when the Kickstarter ends on Monday, May 10!
What is this book all about?

Battlemasters & Berserkers is an incredible class expansion for 5th Edition DnD, bringing you a ton of character options for the fighter and barbarian classes, including new archetypes, backgrounds, primal paths, class-specific magic items, alternate class features, and more. Playing a lord of the battlefield isn’t all about rules, though, so you’ll also find essays on different ways to role-play your characters for each class, as well as explorations of how these classes might play or feel differently in different genres. 5E is at its heart a fantasy RPG, but its system is amply flexible enough to allow for adventures and even entire campaigns in a variety of milieus, and you’ll find a ton of terrific options here for both classes. Inside this amazing class compendium you'll find a wealth of rules expansions for the two fightin'-est classes in the game, including:

Whether you want to focus on savagery or skill, careful martial training or the power of sheer unbridled rage, you’ll find a ton of terrific options in Battlemasters & Berserkers! Buckle up your shield, put on your war face, choose your weapons, and let the battle begin! Grab this spectacular 72-page supplement for 5th Edition and Make Your Game Legendary!