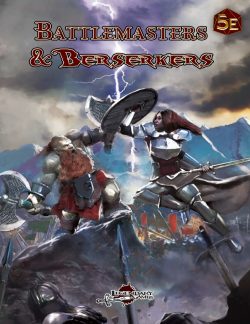 You've Gotta Fight!
Battlemasters & Berserkers is an incredible class expansion for 5th Edition DnD, bringing you a ton of character options for the fighter and barbarian classes, including new archetypes, backgrounds, primal paths, class-specific magic items, alternate class features, and more. Playing a lord of the battlefield isn’t all about rules, though, so you’ll also find essays on different ways to role-play your characters for each class, as well as explorations of how these classes might play or feel differently in different genres. 5E is at its heart a fantasy RPG, but its system is amply flexible enough to allow for adventures and even entire campaigns in a variety of milieus, and you’ll find a ton of terrific options here for both classes. Inside this amazing class compendium you'll find a wealth of rules expansions for the two fightin'-est classes in the game, including:

Whether you want to focus on savagery or skill, careful martial training or the power of sheer unbridled rage, you’ll find a ton of terrific options in Battlemasters & Berserkers! Buckle up your shield, put on your war face, choose your weapons, and let the battle begin! Grab this spectacular 72-page supplement for 5th Edition and Make Your Game Legendary!

NOTE: Print books are en route from the printer and will be shipped when they arrive in July.