Tomorrow brings you a delightful double-shot of fantastic Far East Friday goodness with the Asian Spell Compendium and Legendary Hybrids: Yakuza! Having already given you a look at what’s coming with those spells, today it’s the Yakuza’s turn! 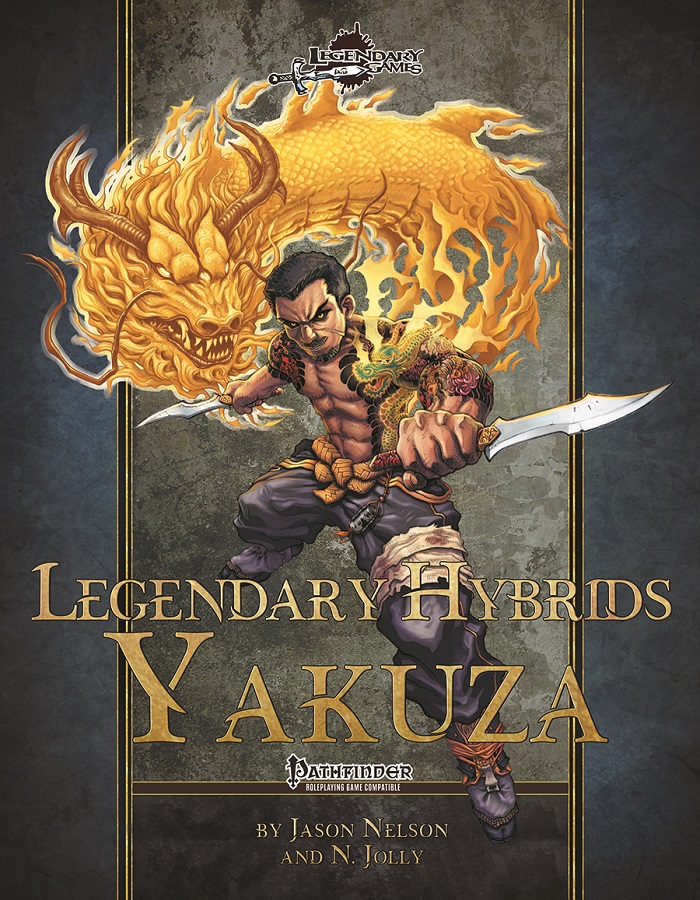 Legendary Hybrids: Yakuza is the latest volume in our series of class-focused player supplements, introducing a new series of hybrid classes like those in the Pathfinder Roleplaying Game Advanced Class Guide that blend the core elements of two different base classes into a unique synergy all their own. The yakuza is a 20-level hybrid class that combines sneakiness and skullduggery with the power of teamwork and organization, bringing together the tactically minded and charismatic cavalier with the shadow-stepping ninja to produce a deadly combination of secret societies and smuggling, wielding the power of their gangs to rule the black markets with equal parts backstabbing and bravado. In addition to the yakuza class and 5 gangs like the Blood Tong and Jade Triad, you’ll also find 8 incredible archetypes from the gun runner and tattooed one to junk pirate and flying tiger, plus favored class bonuses, yakuza feats, and a ready-to-use sample yakuza gang boss, Shinsuke Tatsu of the Dragon Lords!  Grab this 30-page Pathfinder class supplement and Make Your Game Legendary!

Both this book and the Asian Spell Compendium will be available starting tomorrow everywhere fine Pathfinder products are sold, but these are not the last Asian-themed products we have on the way! Our Mythic Monsters team, having already brought you monsters from China and India, is now hard at work on Mythic Monsters: Japan, and of course we also have the incredible Asian Archetypes: Magical coming your way soon, with bloodlines for sorcerers and bloodragers alike as well as some fantastically fun new archetypal options, like the Kaiju Caller, an archetype for the unchained summoner. Since we’re in a previewing mood, here are just a few of its class features!

Chant of Doom (Su): At 8th level, a kaiju caller can expend one daily use of his summon monster spell-like ability while bellowing a terrifying primal chant imploring the attention of the great kaiju. This causes the sky to seem to grow dark, the wind to rise, trees to sway, and the distant tread of enormous footsteps to be heard and felt, interspersed with faraway echoing screeches and roars that slowly draw closer. Living enemies within 30 feet of the kaiju caller automatically become shaken (no save) as long as he continues to chant, up to a maximum number of rounds equal to his Charisma modifier or his number of ranks in Perform (singing), whichever is less (minimum 1 round). This cannot cause a creature to become frightened or panicked, even if they are already shaken. Beginning this chant is a move action but maintaining it is a free action in subsequent rounds. The kaiju caller can take other actions while chanting but cannot cast spells with a verbal component or speak command words while maintaining the chant. If the kaiju caller is deaf, he has a 20% chance for this ability to fail without effect, still expending one use of his summon monster ability. This is a sonic mind-affecting fear effect, and deaf creatures are immune to it.

If a kaiju caller has a drum or similar percussion instrument, he may play this instrument rather than chanting in order to create this effect (using Perform (percussion) in place of Perform (singing) to determine the maximum duration he can maintain the effect). If he does so, he can speak and utter command words while maintaining the chant but must use both hands to continue playing the instrument and so cannot cast spells with somatic components or perform other actions requiring his hands.

While this expends a use of his summon monster ability, using it does not interfere with the kaiju caller’s ability to summon other monsters or his eidolon.

Invoke Disaster (Sp): At 20th level, a kaiju caller can expend two uses of his summon monster spell-like ability in order to create a localized natural disaster, duplicating the effect of any of the following spells: control weather, earthquake, storm of vengeance, tsunamiAPG, whirlwind. Alternatively, he can expend all of his daily uses of summon monster in order to call a kaiju to him. This may be a specific kaiju or spawn of the destroyer known to exist in the campaign world, or may take the form of a tempest, thalassic, or thunder behemothB3. The kaiju or spawn arrives within 1d100 minutes and is not under the kaiju caller’s control. After using this ability, the kaiju caller takes a number of points of Constitution damage equal to the level of the spell he duplicates (or 10 points of Constitution damage for summoning a kaiju) and becomes exhausted. A successful Fortitude save (DC 20 + the spell’s level) reduces Constitution damage by half and leaves the kaiju caller fatigued rather than exhausted. This replaces twin eidolon.