Skip to content
Home » News » A touch of EEEEEEVILLLLLLL!!! Path of Villains preview #1

Earlier this summer we released Path of Dragons, the first book in a new product line devoted to expanding the possibilities in the mythic paths available in the Pathfinder Roleplaying Game. In particular, Path of Dragons was aimed at two main goals:

1.  Leveling the playing field between player characters (which got a huge boost in the mythic rules) and dragons, some of their most iconic adversaries, who got a boost as well but one that just didn’t quite measure up.

2.  Like our long-running Mythic Monsters series, we wanted to bring out an array of iconic dragon-themed abilities that really played up the unique nature of dragons as enemies and the kinds of cinematic, exciting things that it would be cool to have them able to do at the table. We introduced dozens of new mythic abilities, many of general interest to all dragons but also an entire section devoted to specific dragon paths which described common roles that dragons might play in a campaign from bloodthirsty tyrant to dispassionate watcher.

But dragons, of course, aren’t the only bad guys who needed a bit of an upgrade. Enter Path of Villains, the second book in the series and one devoted to villains of all shapes and sizes. The first part of the book is devoted to a discussion of villains and how to use them in your campaign. Some of this advice may be familiar ground for experienced GMs, but it bears repeating when you’re doubling down on villainy and wanting to make it memorable!

What makes a good villain?

A villain can be a person or a monster, a politician or a priest, a demon lord or a dragon king, or just about anything else. What distinguishes a villain is not their raw power. Instead, what differentiates them from just another threat or challenge is that a villain is a part of the story just like the PCs themselves. They are not simply another pile of statistics and treasure waiting to be killed and looted. They are someone with plans and goals that intersect with the actions of the PCs. Sometimes they may be in a position to befriend the PCs, or simply meet them in a non-hostile context, before either really becomes aware of one another’s role in the ongoing story of the campaign. Making a memorable villain requires time and effort on the part of the GM, foreshadowing and articulating their villainy in a way that makes it memorable for the PCs as they start assembling the clues that lead back to the villain and uncovering their true nature. In any campaign, but especially a mythic campaign, what is worse than trying to build up a great villain encounter and having the players say, “Wait, who are you again?” when they meet for the big showdown.

From there, we head through a series of quick hits on the following subjects:

Even Bad Guys Have Friends

Every Villain Needs a Plan

Motivation: Why does your villain have this goal?

Method: How will they do it?

Means: What resources does the villain have?

Milestones: What are the steps along the way to WORLD DOMINATION?

From there, we get into the meat of the product, the Mechanics of Villainy, but that’s for tomorrow’s preview… 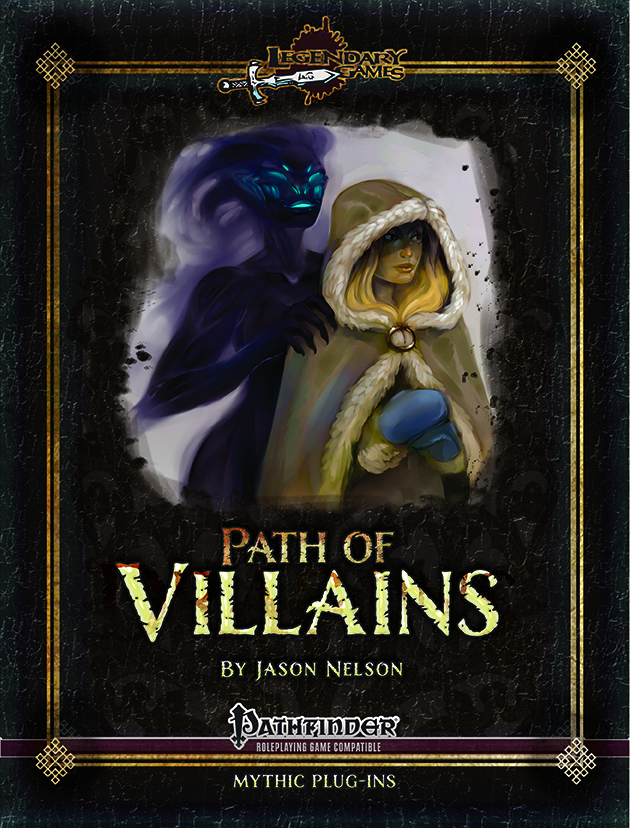