A FEAST OF FLAVOR 2018 NOMINATED FOR BEST FAMILY PRODUCT!
The biggest Kickstarter in the entire Kingdom is LIVE and ready for you!
Are you a D&D Duke or a Pathfinder Prince?
Join the Royal Court and  claim your throne as a King or Queen!
Now through July 3rd, rise up and RULE! 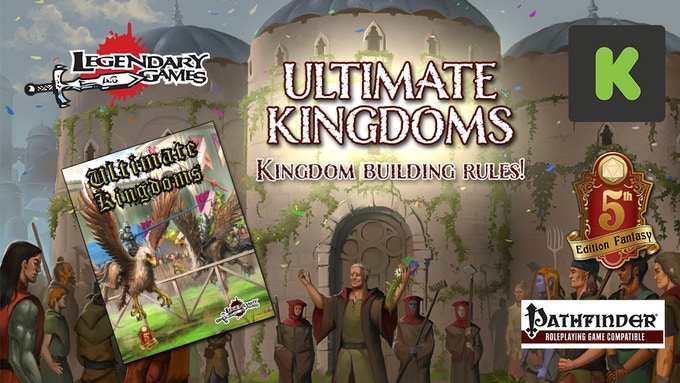 Heroes find fame and fortune in their adventures, but why just be rich as a king when you can actually BE A KING? Carving out a domain of your own has been a part of the game since the beginning, and Ultimate Kingdoms is an ideal supplement to cover what your character can do when you get home from that epic journey or drag your loot out of the dungeon. There’s more to the hero life than just buying the sharpest sword or the mightiest staff. Your character should really be somebody in the campaign world, make their mark, and build a legacy that will last, and that’s where Ultimate Kingdoms comes in!
This hardback book contains the rules you need to build a kingdom and a legacy for your character! Legendary Games has compiled over 400 pages of our best-selling Ultimate line to bring you an awesome array of options for your characters outside of dungeon delving, including:

PLUS, we’ve got amazing stretch goals, an army of awesome guest authors spanning the history of D&D, Pathfinder, and more from old-school AD&D to modern Adventurer’s League and all points in between to bring you exciting new additions.

Get on over to Kickstarter and claim your crown today!