We’ve been focusing so much on new product lately – and with good reason; there’s a lot of great stuff coming, including Path of Dragonsready to release probably later today, or tomorrow at the latest – but we should pause now and then for a look back at our past products garnering kudos! The legendary Endzeitgeist has been churning through our Mythic Minis series with solid marks all around, but he also just dropped another 5-star review for Mythic Monsters: Abyssal that goes into great detail (as his reviews always do), but the part I wanted to highlight is in is conclusion, where his comments about this product really sum up what our entire Mythic Monsters series is all about:

Jason Nelson, Tom Phillips and Alistair Rigg provide a glorious collection of uncommon abyssal foes – and deliver in spades. You know, mythic can be often taken as a bland “faster, harder, wider”-contest and yes, some creatures can be seen as a relatively straight progression. The vast majority of abyssal threats in here, though, is not content with such a treatment, instead developing the base creature, often into something truly distinct that works so much better than the base beast – with signature abilities emphasizing niches and foci of the monsters herein, there is not one critter in here that has not been massively improved, with the abilities of demodands and their thus much tighter focus making them my favorites in here and, perhaps for the first time in ages, actually DISTINCT.

You can read his full review here on his own site, as well as on our product page at Paizo.com! Thanks Endy, and thanks to everyone who takes the time to review one of our products. For every game publisher, customer reviews can help other people see what’s between the pages from a fan’s-eye-view, and reviews also help us do things better every time out. 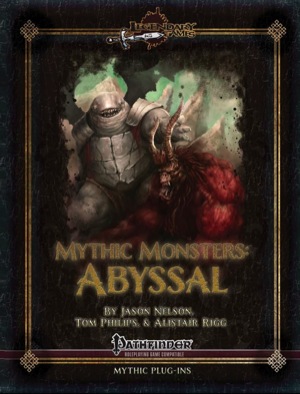