Skip to content
Home » Uncategorized » 2013 Previews #10: Spellbones of the Devourer

One of the delights of creating Gothic Grimoires is that we have the opportunity to redefine what we think of as a “spellbook,” in that they can have far more in them than just spells, and at the same time be far more than simply a book! The “tome” itself is not merely a convenient delivery mechanism for a handful of new game mechanics, but rather almost a character in itself, its nature intimately tied to its history. So it is with the aptly named Spellbones of the Devourer, which is exactly what it says on the tin: the preserved skull and bony fetishes of an overly curious researcher into the ancient occult. Driven by her studies to become what she beheld, she began reconstructing and re-inscribing the primeval pictograms upon her own flesh and bone, focusing their eldritch power and calling forth a new cannibal cult in her wake. Some secrets are better left forgotten, but her derangement has brought back into the world feats like Eater of the Dead and Necrophagic Spell, and spells like dermal flensing, devouring maw, ghoulish devolution, and hungry are the damned.

Before I leave you with Frank Hessefort’s magnificent illustration of this horrific headdress, I must also give a one-word spoiler for next Monday’s preview, which this product discusses in greater detail and which should tickle the fancy of the true old-school grognards out there. That one word? THOULS. 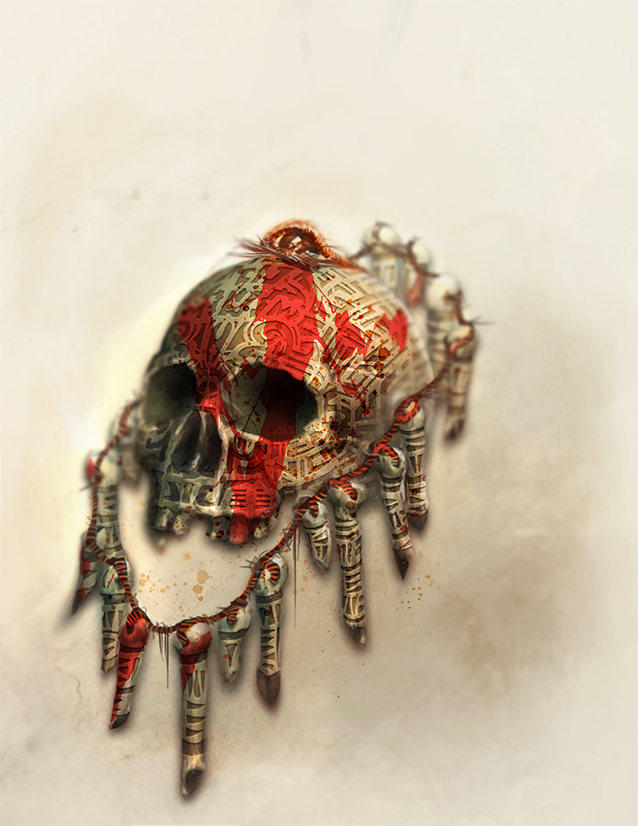